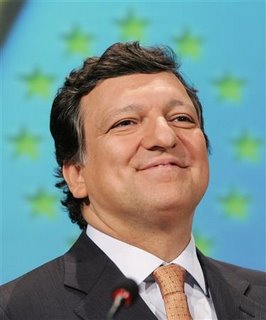 The commission today – or so it tells us - has adopted "an ambitious policy agenda for Europe's citizens", proclaimed under the heading: "Delivering results for Europe: Commission calls for a citizens' agenda".

There is one slight problem with this though. The "agenda" is set out in the document, "Communication on Plan D and the period of reflection", COM (2006) 212, 10 May 2006, which so far has not been published on the web. Thus, while this may be a "citizen's agenda", at the moment, neither mere citizens nor even journalists are allowed to see it.

Thus do we rely on the commission's own press release (link above), from which we learn that this is its contribution to the June European Council, "picking up the messages the Commission has received from Plan D and the national debates during the period of reflection called by Europe's leaders last year."

"It is time to match dialogue with delivery," proclaims the commission, with el Presidente telling us, "Today is a milestone for my Commission." Without identifying the planet from which he is speaking (which does not seem to be Earth), he then goes on: "Over the last eighteen months we have successfully addressed many of the issues that were deadlocked when I took office. Today, we are adopting an ambitious, policy driven agenda for citizens."

So, in fact, this is not a "citizen's agenda" after all – in the sense that it is determined by said citizens… it is an agenda for citizens, an altogether different thing.

Never mind though, the fragrant Margot tells us that, "with this agenda, we demonstrate that we have listened to citizens." So, even if we are not allowed to see it, we know it's alright. Margot has said so. "Citizens want to have their say. They look for European leadership…" she says, also without declaring from which planet she is speaking. She does, however, acknowledge that "they have mixed feelings about membership in the EU or the way the Union works."

I suppose that's one way of putting it, as is her assertion, "they trust the European Union on policy delivery". We do, of course, have no option... having not seen the document. We have, therefore, to take it entirely on trust that the commission's agenda (which we haven't seen) is "rooted in the strategic objectives of prosperity, solidarity and security," and that it has a "continued focus on jobs and growth". But what price this little gem? "As the debate on Europe shows…", says the commission,

…there is a gap between the action Europe takes and the public's perception of Europe’s role. To regain the confidence of the public, the commission will harness all its resources, both internally and externally, to deliver solutions to the issues raised by citizens. This is a policy response centred around a citizens' agenda (which we haven't seen).

Then we get to the "meat": the commission has set out twelve policy initiatives to deliver "a Europe of results". However, as yet, we are not allowed to know what they are – only some of the "concrete" proposals: