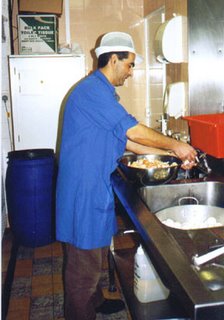 Reading and listening to exchanges on migrant labour, I am going to depart from our normal practice of providing a commentary on the days events and offer some observations, based on personal experience, which might help fuel and inform the debate.

By way of background, one starting point is my earlier experience as a consultant environmental health officer, specialising in food safety, when I used to inspect dozens of "big name" hotels and restaurants in London's West End, on behalf of their owners.

The main part of my job then was inspecting the kitchens and writing reports on the conditions found. And, as you would expect, most of the problems related to cleanliness, which I would laboriously record, time and time again.

Over the years, what I found were two things – that the same problems constantly recurred, and that the root of those problems was the employment of low-paid, most often migrant labour, who were simply not up to the job.

But, when I pointed this out, I was told that the economics of the catering business did not allow better wages and, in any case, British workers (except the very dregs) would never be prepared to do such low-grade jobs as kitchen cleaning.

And, believe you me, the job – most often described as "kitchen porter" – could hardly get any lower in the social pecking order. In my researches, I actually took on the job, working as a cleaner in the hothouse of a number of kitchens, and you very quickly learn that you are the lowest of the low.

Frankly, I was bored with writing the same old reports about the muck I had found so, with one particularly enlightened employer, I set about changing the nature of the job.

To do this, I researched means of mechanising many of the more arduous tasks, and making them more interesting. For the most deadly and time-consuming job of them all – pot washing – I found a device used in the automotive industry, used for degreasing components, called an ultrasonic tank. With some modifications and the right chemicals, we found that heavily soiled kitchen utensils could be immersed in the tank – sometimes for only a few minutes – and come out factory new.

So efficient was the machine that, in one kitchen - for the modest expenditure of £5,000 – we replaced two low-paid men with one man, who also did other duties.

In a group of six restaurants, I then took out one low grade porter from each, and created a team of four, specialist, peripatetic "technicians". We gave them uniforms, special training and – a higher grade of pay but, with being able to dispense also with periodic deep cleaning, the overall costs were less and the standards immeasurably better.

After than experience, I was employed as a consultant to a major multi-national contract cleaning company, to set up a kitchen "deep cleaning" operation. I applied the same magic, this time recruiting, quite deliberately, ex-prisoners for my workforce. I found them hard-working, loyal and incredibly effective. The first job I took on was an inherited contract, cleaning a hospital kitchen. Normally taking three weeks, with twenty (low-paid) staff, I put in eight of my technicians and we cracked it in five days.

To my amazement, however, my ideas were not welcome in the group. Then, one of the senior directors took me aside and explained what the job was really about.

Contract cleaning, he told me, was not about cleaning – it was about making money. And the industry base was "cost-plus", adding a percentage to the wages of every cleaner employed. Thus, the more cleaners on the contract, the higher the charge and the greater the profit. However, the greater profit came from keeping wages low, so that cheap, migrant labourers were at a premium.

There was simply no mileage in better trained, more efficient workforces. The individual profit margins might be higher, but the net yield was lower, so there was more money in having a large, unskilled workforce.

In building terms, there is a similar equation. Recently, we had our own kitchen refurbished. Two local workmen turned up on the appointed day. The equipment was delivered and, four days later, we had a brand, spanking new kitchen, finished on-time, to budget, at a very reasonable cost, with a superb standard of workmanship.

In Yorkshire, we have no shortage of good craftsmen and building workers, and it used to be common practice for teams to take vans down to the "smoke" for the working week, enjoying the cheaper living standards here while taking advantage of the higher wages in the capital. But their employers got greedy, lifting charges (but not wages) to exploit the local labour shortages and then, as the limit was reached, employing cheaper migrant labour to keep up profit margins. Man for man, though, the highly-skilled Yorkshire tradesman, is better value, but there is no premium in efficiency.

Many of the notional gains from employing migrant labour, therefore, are illusory, based on the economics of the madhouse. Better skilled, indigenous labour can often do the job more economically, if the charging framework allowed it.

But there is another aspect to this. On the broader national scale, what is the economic value is getting migrants in to do the job if that means your British workforce is sitting idle at home, on the dole or on benefits – or out thieving, to make a little bit on the side.

The same also goes for manufacturing goods, especially in terms of public procurement. If a public authority buys "offshore", then – since this is paid for by the taxpayer - a simple calculation should apply. Take the "offshore" price and then compare it with the price from a domestic manufacturer. But, in respect of the domestic price, deduct the amount of tax that will be paid by the supplier and his employees. Then, to the "offshore" price, add the total cost of the dole and benefits that will be paid to British workers sitting idle because the work went to foreign workers. In many instances, the "cheapest" price turns out to be very expensive.

The trouble is, that in assessing the individual costs of project, the supplier of services or the purchaser of cheap foreign goods does not bear the social cost of their actions. They may get the benefits of the cheap labour, or the cut-price imports, but the taxpayer pays the real price.

As for the bullshit that the migrants are "only doing jobs we would not do", no more is this used than in agriculture, where – it is claimed – that British people simply would not do the job.

Yet, in my youth, I spent a year on an Israeli kibbutz, working for nothing as a farm labourer, doing precisely the jobs which our industry tells us the British won't do. And the "tourist camp" – as the Israelis called it – was one of hundreds, housing thousands of young foreigners who kept Israeli agriculture going while their sons and daughters went off to war.

Now, the situation is not analogous but, with a little imagination, I have no doubt that "farming camps", set up for British students and youngsters – with basic entertainment and other diversions – could be highly popular. We don't know that, and will not know it, because it has not been tried and will never be tried.

Yet, during the war, when hundreds of thousands of middle-class women were conscripted into farming, as part of the Land Army, many counted the time spent as the happiest in their lives. My own mother was one such.

In short, there are many different facets to the use of migrant workers and while – or so they tell us – there are economic benefits, these may be overstated, while the downsides are all too apparent. For sure, any one of us can gain short-term, from the Polish plumber – especially when getting a local seems impossible – but there is more to this than saving a quick buck. There are other ways round local labour shortages and difficulties, without having to resort to migrant labour in what amounts to a "race for the bottom".

Opening our borders to the unrestricted flow of migrant workers, from the EU or anywhere else, has never been a good idea and, in many respects, British society is suffering the trauma from earlier phases of such a policy, when huge numbers of Jamaican workers were imported to solve post-war labour shortages.

It is this, in its diffident, and ill-expressed way, that UKIP has been pointing out. It is one of the few parties that have attempted to raise this issue – apart from the BNP, which loses out because of the racist overtones – and this issue is certainly one that should be discussed widely. Knapman, with his little antics, has betrayed his own party, and made rational discussion that much more difficult. But, as I suggested on my earlier post on the BNP, simply not talking about it won't make it go away.