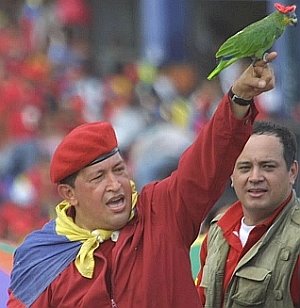 Some time ago the writer and journalist John Derbyshire restated Orwell’s famous dictum:

“Wherever there is a jackboot stomping on a human face, there will be a well-heeled Western liberal to explain that the face, does, after all, enjoy free health care and 100 percent literacy.”

We have heard a good deal of this about Cuba, a country from which people seem to be very anxious to escape. It cannot be, surely, that they dislike free health care and 100 percent literacy?

It seems that some of that free health care is now spreading to Venezuela, another country suddenly beloved by the Left and not so Left commentariat of Europe. We have it on no less an authority than Hizonner the Mayor of LondON that millions of Venezuelans, who have never seen a doctor in the past, are now treated by the Cuban medicos flown in for the purpose.

How many Cuban doctors we are not told and how is it that they could just simply leave their own country en masse remains a mystery.

It is, of course, obvious what Hugo Chávez and Fidel Castro have in common and it is not, strangely enough, ideology, the former being more of a nationalist than an internationalist despite the meddling in other countries. They are both challenging the United States and that seems terribly chic.

Naturally, it was not so amusing when Chávez turned on the Europeans, forcing new contracts on them, which involved greater ownership by the Venezuelan government, sometimes to the point of outright confiscation or, as has been announced, deciding to tax companies working the Orinoco.

“The tax and royalty increases will affect ChevronTexaco, ConocoPhillips and ExxonMobil of the US, as well as Total of France and Statoil of Norway. About $17bn has been invested in the four Orinoco projects since their inception in the late 1990s, and the projects are today estimated to be worth about $33bn.

On Sunday, Mr Chávez said that Venezuela would tap extra revenue from the world oil price boom through what he termed an "extraction tax" on the Orinoco Belt operations, which are known as "strategic association" projects.

"For next year the extra revenue looks like it will come to more than a billion dollars," he said. Venezuela's move to boost rates on the heavy-oil projects follows measures taken last month to convert 32 separate operating contracts, which accounted for about 500,000 b/d, into joint ventures in which the state holds majority stakes.

That move upset some oil multinationals. Total and Italy's Eni, which objected to the conversions, saw their oilfields unilaterally taken over by the government, so far without compensation.

Chávez has also supported the forcible nationalization of oil fields in Bolivia, which may not be such a good idea for the industry. Bolivia is not a major oil-producing power yet and does not have customers all over the world, merely in Brazil. It is not in a position to play too many games with the market.

Unfortunately, Hugo Chávez is already going the way most dictators do. He has just announced that if the opposition continues to boycott elections, citing various irregularities and El Presidente’s growing authoritarianism, he will have a referendum that will change the constitution to give him power for 25 years.

“Speaking Saturday at a stadium packed with supporters in central Lara state, Chavez rejected allegations he was a power-hungry tyrant but said he might seek to extend his rule beyond current term limits if the opposition pulls out of the presidential vote, as it did last year's congressional election. ...

The Venezuelan Constitution allows a president to be re-elected only once in immediate succession. Chavez is eligible for re-election to another six-year term in December, but if he wins he wouldn't be able to run again in 2012.

It wasn't clear if Chavez, 51, was talking about holding a legally binding vote to eliminate limits on re-election or proposing a plebiscite. Before Chavez took the stage, thousands of his supporters chanted: "Oh, no! Chavez won't go!"

Things are, in fact, going from bad to worse in Venezuela.

Fearing that he might lose support in the barrios, Chávez has decreed that nobody can sell petrol for more than 3 cents a litre. Sounds great, except that the petrol stations, burdened as all businesses in that country with rising taxes, minimum wages and so on, cannot make a living.

About half of them have told the ministry that they would like to close. At that point the joy of having petrol at a fraction of the cost that Americans pay for it will disappear. If nobody is selling the stuff, the cars will have to stop and that will cause some hardship in the country.

But the biggest shock seems to have been barely noticed. On April 28 the Financial Times reported [subscription only] that

“Venezuela, the world's fifth-largest oil exporter, has struck a $2bn deal to buy about 100,000 barrels a day of crude oil from Russia until the end of the year.

Venezuela has been forced to turn to an outside source to avoid defaulting on contracts with "clients" and "third parties" as it faces a shortfall in production, according to a person familiar with the deal. Venezuela could incur penalties if it fails to meet its supply contracts.”

The reason is not hard to seek for anyone familiar with the way socialized industries work and countries run by power-mad demagogues function:

“Under President Hugo Chávez, PDVSA's oil output has declined by about 60 per cent, a trend analysts say has accelerated in the past year because of poor technical management.

Mr Chávez's push to extend his influence throughout Latin America and the Caribbean with promises of cheap oil for friends and allies may be overstretching PDVSA's finances, however.”

The story has now been reported by Mosnews.com, which quoted the Financial Times. It is, however, curious that it was not picked up by anyone else, least of all by those who would like to see something heroic in the plucky little challenger of the American giant.

Venezuela is denying that the purchase of Russian crude oil has anything to do with declining production.