The joys of VAT 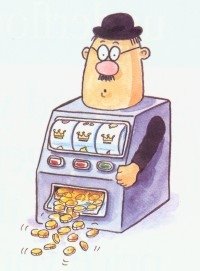 But, not only should the business community have cause to resent this tax, everyone in the European Union should hold similar views for the very complexity that makes it so unpopular with business also makes it a thieves' paradise. And we are not taking about peanuts. VAT fraud accounts for estimated losses of at least €60 billion a year – or ten percent of all transactions – representing real losses which have to be made up through other taxes. Furthermore, this is money which helps finance organised crime and terrorism.

So huge is the scale of the fraud that it has even percolated into the corporate brain of the commission. Thus, next week, Laszlo Kovacs, the EU tax commissioner, is set to propose a series of options to the member state finance ministers in an attempt to remedy the situation.

Were this not an EU-devised tax, most if not all of the member states would have ditched it years ago, because of the fatal flaws in the system that make it so prone to fraud. But, national governments, of course, have no powers to abolish EU laws and the commission – which is the only institution which can set such a process rolling, is not about to scrap this tax.

Instead, Kovacs is propose that the tax is no longer refunded to suppliers when their products or services cross borders – through which means most fraud occurs. He wants refunds on cross-border goods and services to be passed directly between governments.

Needless to say, this will require con-ordination by the commission, to set up the cross-border payment system, thereby adding to its powers. It would also lead to increased pressure for harmonisation of VAT rates, as different national rates would be extremely difficult to administer. Thus Britain, Germany and Austria are suggesting the use of a "reverse charge" system, where VAT is paid only by the supplier at the end of the chain.

That is to be included as one of Kovacs' options, as is increased co-operation between national tax authorities, but the commission's preference is for the abolition of direct, cross border refunds.

Any changes, though, will have to be agreed by unanimity. But, since the last fundamental change to the VAT regime was in 1977, with the VAT Sixth Directive, and member states have failed ever since to agree any substantive reforms, the chances of securing change this time round are not good.

Thus, while the commission and the member states bicker and manoeuvre, the criminal fraternity will continue to enjoy its bonanza while the "citizens" of Europe will have to keep paying the bill. Such are the joys of membership of the European Union.