Bi-regional strategic interests (whatever they may be) 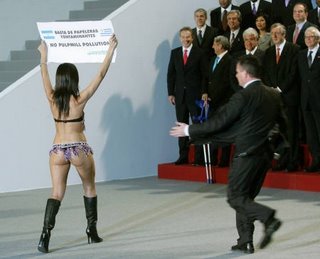 Sometimes the EU sees itself as a burgeoning state and sometimes as a regional bloc that negotiates with other regional blocs. Both are fraught with difficulties. The world regionalization agenda was to the fore in summit meeting of 58 EU member states and Latin American countries in Vienna that has just ended.

Actually, it came to no conclusion at all, because as President Barroso sadly explained, the Latin American countries did not seem to present a united front.

“If we want to fully develop the potential of our partnership we also need to know what is your strategic vision.”

The trouble is that his strategic vision is something called bi-regional agreements and the truth is that the Latin American countries cannot agree among themselves. Come to think of it, the EU member states do not necessarily sing from the same hymn sheet.

The summit was dominated or overshadowed by energy problems or, to be quite precise, by the political problems created by the Venezuelan and Bolivian governments through their forcibel nationalization, confiscation and high taxation.

In fact, these problems are being felt in Latin America itself.

“Brazil and Bolivia are barely on speaking terms since Bolivian President Evo Morales accused the Brazilian energy company of operating illegally in his country.

Bolivia's president remained in combative mood, telling Brazilian TV that some foreign oil companies were no better than "smugglers".

"We said we need partners, not masters," he said.

Brazilian Foreign Minister Celso Amorim said he had little confidence in any commitments made by Bolivia at the negotiating table.

"The Brazilian government will defend the interests of Brazilians in a firm manner, without shying away from dialogue, but we do not expect that any agreements reached through that dialogue will actually be respected, or that they will not be undone by a statement the following day," he said.”

Some of the countries, in particular the Central American ones, have expressed a desire to negotiate various free trade agreements with the European Union, while the others merely signed the statement about the need for bi-regional strategic partnership.

Meanwhile the negotiations between Mercosur and the EU are dragging on in the usual fashion:

“The South American group believes Europe is dragging its feet on market opening on both farming products and industrial goods.

Europe, on the other hand, is seeking its own concessions.

"We need major movement and flexibility," one EU official told Reuters. "If they have changed their minds, we are ready to talk, but it won't be easy."”

Still, as long as there is bi-regional strategic partnership, the need for further meetings and summits is guaranteed.