Towards a European Health Service 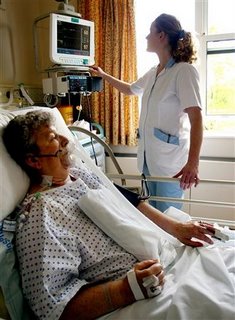 This morning's news that the European Union Court of Justice (ECJ) has supported 74-year-old grandmother, Yvonne Watts, comes as no surprise.

The court, in its final ruling, has effectively paved the way for thousand of NHS patients who travel abroad for surgery to have the costs of their treatment reimbursed by the government, with huge implications for the whole structure of the NHS and the provision of state health services.

The case arose after Yvonne Watts sought treatment for osteoarthritis in a British hospital in 2002, when she was placed on a one-year waiting list for surgery, despite a consultant finding that her mobility was severely hampered by her condition.

When she applied for treatment abroad, Bedford primary care trust refused to provide her with an E112 form allowing her to seek treatment elsewhere in the EU, saying that the 12-month wait was in line with government targets setting an upper limit of 15 months.

However, Mrs Watts finally went to France and paid £3,900 for a hip replacement operation in March 2003. She then sought reimbursement through the courts and, in October 2003, the UK High Court ruled that patients facing "undue delay" in waiting for NHS operations had the right under EU law to receive funding for treatment overseas.

This finding was supported by the ECJ Advocate General in December 2005, who argued that contrary to the position taken by the UK government, the EC Treaty provisions on the free movement of services apply to the case in question.

He declared that medical services are not exempt from the scope of the EC Treaty and that Mrs Watts received such a service in return for remuneration. The fact that the NHS is an entirely public body, funded by the State and providing health care free at the point of delivery, was irrelevant for determining whether the situation fell within the scope of the Treaty.

The role of the NHS was merely instrumental in relation to the main transaction between Mrs Watts and the hospital in France. He thus took the view that there was "no doubt" that Mrs Watts was a recipient of services for the purposes of the EC Treaty.

Already, there has been mixed reaction to the ruling. Dr Scott Greer of University College Hospital, London – an expert on the influence of Europe on UK health policy – says the court ruling was both "inevitable" and extremely serious because it now means we really have a European health system.

We are, in fact, not there yet, but this case comes on the back of others which – rather like the defence sector – is tightening the noose on national systems, gradually creating the framework for that "European" service.

Not least there was the B.S.M. Geraets-Smits v Stichting Ziekenfonds judgement in July 2001, which accepted that a system of prior authorisation, before patients could seek treatment abroad, was justified, if there were overriding reasons connected with "the financial balance of social security systems" and "the maintenance of hospital services available to all", provided such restrictions were not applied arbitrarily.

The Watts judgement seems to go a little further in defining the conditions where treatment must be authorised, and is a classic example of the incremental, or "salami-slicing", approach taken by the ECJ.

What is puzzling, though, is that in citing the treaties, the Court is relying on the right of "EU citizens" to receive services within the community but the treaty actually offers no such right. Article 49 of the Treaty only confers the right to provide services, outlawing any restrictions imposed in respect of nationals of member states. It thus seems a classic piece of legal adventurism that the Court has somehow transmuted a right to provide services into a right for everyone to receive them.

This notwithstanding, at one level the judgement is benign. It challenges the monopoly of the individual member state to provide free-at-the-point-of-use medical services, and expands the right of the individual to chose treatment anywhere in the EU.

On the other hand, there are significant sovereignty issues in that the member state no longer has the power to define how, where and under what conditions taxpayers' money will be spent. Furthermore, if the small trickle of "medical tourists" ever became a flood, this could have serious economic implications, and possibly impact on employment levels in UK medical services and their suppliers.

These issues present a serious challenge to Eurosceptics. Most would welcome a weakening of state control over health services and wider patient choice, but it is uncomfortable to find that the impetus for "liberalisation" comes from the European Union.

On the other hand, no Eurosceptic will entirely welcome the drain of wealth and employment to other member states, especially when we have a system which treats EU nationals free, while our own nationals are charged in EU member state hospitals, with our taxpayers having to foot the bill.

What may tip the balance of argument, however, is the certainty that this process of incremental integration is far from over. And, as the net tightens, it is a racing certainty that the commission, though the ECJ (to say nothing of Art. 52 of the Treaty), will seek to harmonise standards in hospitals throughout the EU, as a means of promoting the "liberalisation" of services.

That, if anything, is the hidden peril of the series of ECJ judgements in that the Court has quietly slipped in the concept that state-provided health services are simply another "service". They thus come fully within the framework of EU law, allowing controls to be imposed by qualified majority voting.

While "schools 'n' hospitals" have hitherto been the exclusive province of domestic politicians, this is no longer the case with hospitals. And, if they are "services" within the meaning of EU law, can schools long be excluded? Moreover, if these become EU-controlled, what will our politicians do then, poor things?

Whatever concerns we might have about our own NHS, therefore – and there are many – the prospect of the Service fully in the grip of the mad regulatory machine in Brussels, bringing to bear the same skills it has deployed in the CAP and CFP, is not one that could be embraced with equanimity. Thus, the apparent gain Mrs Watts seems to have made on our behalf may, in the longer term, prove illusory.