On a collision course 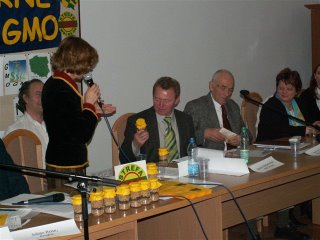 The EU commission has already shown its teeth when it comes to imposing its regulations on the marketing of genetically modified seeds, and has had a gaggle of member states in court – including Austria, France and Germany – for defying its edicts and daring to ban GM seeds in their territories.

This is largely the work of the International Coalition to Protect the Polish Countryside. It has been running the campaign "Stop GMO's in Poland - Create GMO free zones" since June 2004 and achieved its first success in September 2004, with the declaration by one province for a GMO free zone. Others followed, until, on 16th February 2006, the last of the 16 declared.

In February of this year, the ICPPC hosted an international conference in
Krakow (pictured), with the participation of representatives from 13 countries, drawing up what it called the Krakow Declaration, calling for a 10 year moratorium on all GMOs.

The Act banning GMOs was passed on 27 April 2006 by the Seym (lower house), having already been agreed by the Senate, an action that now puts Poland on a collision course with the commission, which has consistently refused to accept national or regional independent banning of GMOs.

Whether Kaczynski's action is bravado, or he plans to make the new law stick, remains to be seen, but the commission is going to have to hold the line on this issue if it is to retain its authority. Poland looks to be heading straight for the ECJ and the question is, what will it do then?