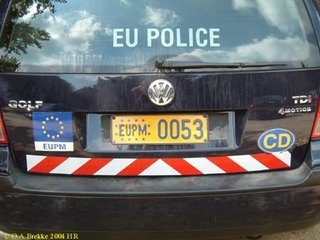 The Financial Times and others are telling us that the commission is calling for a greater EU role in judicial matters. This is Barroso, speaking in his home city of Lisbon, who claims greater EU involvement is needed to bolster cross-border efforts against terrorism and organised crime.

But what is particularly wicked is that the commission president is calling in a the special Eurobarometer, declaring that "People are asking for more Europe in order to combat terrorism and organised crime. It is our duty to respond to this appeal."

In that Eurobarometer, however – as readers will recall – the qualitative study revealed that, "the institutional workings of the Union and how decisions are made is a matter of nearly complete ignorance!. Thus, if people are calling for !more Europe", it is from a position of ignorance of what that might entail, and the consequences.

Nevertheless, the lack of what might be called "informed consent" does not worry Barroso. But, as the FT reports, such a move "could face resistance from some countries," prompted by concerns that the commission is making yet another power grab.

Yet again, though, the same old arguments are being wheeled out, that action is often delayed as police and judicial co-operation falls within the "intergovernmental" Pillar III provisions of the Treaty of the European Union, with decisions reached by unanimity.

Barroso wants member states to give up national vetoes, moving to qualified majority voting (QMV), which would "make decision-making easier". And the UK, as always (remember Blair's "red lines"?) is not opposed in principle to such an idea.

The crucial issue, however, is that the provision for QMV was in the EU constitution, so this is seen by some as yet anther attempt to smuggle the constitution in through the back door. Conservative MEP Syed Kamall says, "This latest attempt by the European Commission to take away yet more national sovereignty will just go to exacerbate Britain's impression of the EU as out of touch."

According to Bloomberg though, details are very vague, and no formal proposals have yet been tabled.

Possibly, the Finnish government, which takes the EU presidency in July this year, may firm up on proposals, although the growing Euroscepticism in that country may make that difficult. Equally possible, this is just another try-on by Barroso, desperately anxious to launch a high-profile initiative to bolster his own lacklustre presidency.

Only time will tell.