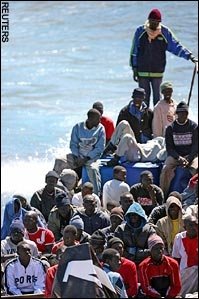 Only a few days ago – on 19 May to be precise – we saw in The Telegraph a poignant plea from the Spanish authorities in response to a new flood of illegal immigrants into the Canary Islands.

"This is Europe's problem too," went the refrain, after more than 1,400 immigrant had arrived in Tenerife and Gran Canaria in the previous week, making 2,000 landing in the month, mostly from Senegal and Mali. This compared with 4,751 in the whole of last year.

It cannot have been a complete coincidence that, only two days later, we read in the Sunday Telegraph of plans to set up an EU coastguard service, not least of the functions of which would be to assist member states in controlling illegal immigration via maritime routes.

Now, courtesy of Associated Press, we learn that the EU is preparing to deploy aircraft and patrol vessels in support of the Spanish authorities, in an attempt to stem the flood of migrants headed for the Canaries.

The "help" was announced by EU justice and home affairs commissioner Franco Frattini, himself a staunch advocate of an EU coastguard service. He has pledged the EU to "provide operational support as fully as we can to the Spanish government to deal with an urgent and difficult situation."

Frattini added that Frontex would also co-ordinate in the coming weeks surveillance aircraft and patrol vessels, manned by soldiers and police, drawn from eight EU member states to prevent the would-be migrants from making their way to Europe.

"We already have eight which are prepared to express their solidarity and make available to us rapid offshore vessels and reconnaissance planes," Frattini said, adding that the EU-mandated mission would patrol the coast off western Africa down to Gambia and Senegal, from where most of the would-be migrants are sailing. Frattini said member states governments, including Spain, will be able to benefit from joint EU repatriation flights.

But, if these are temporary expedients, the commission is not being reticent about exploring the longer-term potential of this "beneficial crisis". Frattini is also calling for member states to back plans for an emergency EU fund for quick responses to mass flows of migrants, as well as setting up a permanent plan for EU patrols in the Mediterranean to intercept illegal migrants – with a start-up kitty of €3 million already earmarked.

From a vague, theoretical concept, the EU's ambitions are taking on a more tangible form with remarkable rapidity.