Success with the Poles? 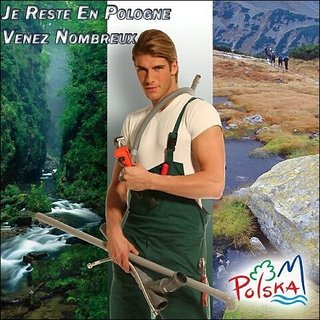 Felicity Lawrence over at The Guardian is speculating what might happen if all the migrant workers in the UK were to find their voice and demonstrate their presence as those in the US did last week.

A few days without migrant workers here could bring life to a halt soon enough, she writes:

What if there were no eastern European au pairs to work long hours so that thousands of professional women can get to work early and come home late; no African migrants to sweep out the station concourses and their coffee shops before dawn; no cheap contract cleaners in the financial centres of the City; no Kosovan car washers for the executive cars; no Filipino carers in the old people's homes; no Polish plumbers to fix the leaks; no Ukrainian builders on the construction sites; no Brazilians in the sandwich factories. No South Africans to pack the supermarket fruit and veg. You'll be able to add your own list of debts to newly arrived workers.

Low paid migrants, she adds, keep so many parts of our globalised economy going that any collective action would have a dramatic effect. Our food supply system is perhaps the most vulnerable sector. Centralised supermarket distribution and "just in time" ordering means nothing is kept in stock anymore. It would only take a shutdown of a few key points for a few days to paralyse the country. In the last fuel strike we very nearly did run out of food.

"But will migrants here ever rebel and exert their power?" she asks, then telling us that there are signs that they are organising. For instance, one group was brought into the country last summer, with false promises to work in a meat factory in Wales and had extortionate housing and visa fixing charges deducted from their wages.

"With the confidence of new EU citizens," chirps, Lawrence, "they became union activists, got new jobs, sleeping under the bushes while they struggled to find new accommodation and waited for their first pay packets." From such small beginnings and individual determination, movements grow.

Of course, if they are really in trouble, they could always go to one particular UKIP MEP, who – we are informed – would be happy to put them up in his attic.