You have to smile 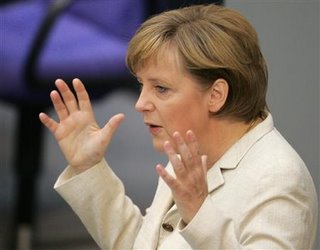 On the other hand, the BBC website, while covering the same event, headlines its story, "Merkel says EU needs constitution", with a cut-away panel which has her declaring, "We need to think about how we make the constitution a success".

The substantive part of the FT report has Merkel calling on Brussels "to abolish a quarter of European legislation to free business from bureaucracy", saying that "promoting the fight against bureaucracy, encouraging growth and employment, was the best way for the EU to reclaim support from overwhelmingly sceptical citizens."

Nevertheless, albeit downpage, the FT does report Merkel strongly endorsing the constitutional treaty, saying: "Europe needs it... I want it, Germany wants it, and, I am sure, the vast majority of this house does too." Yet, although she said her government would push the project forward "at the latest" during the German EU presidency, she warned against acting precipitously.

"It is a difficult issue; there are antagonistic interests; [undue haste] could lead to a blockade. We must therefore think hard about how to proceed," she added, with the FT noting that Berlin "shares the Commission's scepticism" about the likelihood of achieving a breakthrough on the constitution before next year’s presidential elections in France.

What we get from the BBC, though, is Merkel saying, "We absolutely need the constitution to ensure the European Union is effective," and, after a token nod to scrapping "a quarter of the EU's rules and regulations", it has Merkel concentrating on the constitution. Through the prism of the BBC, she declares: "If it's not tackled before, you can be sure that the German presidency will focus on this," only then being allowed to say: "However, I am against moving too quickly and putting us back in a situation where we can't move forward."

The BBC's emphasis is doubly interesting as it was only on Tuesday that Merkel said that Germany would continue to look for ways to revive the dormant EU constitution, but would "give priority to research when its assumes presidency of the European Union". Then as now, she warned against taking "hasty action" that could result in setbacks, clearly signalling that she was not going out on a limb for the constitution.

I suppose, though, we can't be too critical of the BBC in its desperation to advance the cause of the EU it loves so much, especially as Reuters also offers a piece entitled, "Merkel vows to press for European constitution".

But, at the very least, you have to smile.