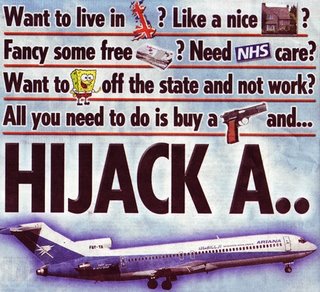 The Sun newspaper yesterday was all a twitter this morning about a "pledge" by the Boy King to "reform, replace or scrap" the Human Rights Act if he is elected.

This also appeared in The Telegraph and was later picked up by the BBC website.

Cameron's comments follow the court decision to allow nine Afghans who hijacked a plane to Britain to claim asylum in the UK, and had the Conservative Home website purring with approval.

Reading the small print, however, the Boy's pledge is very narrowly drawn. His first recourse is to seek "memorandums of understanding" with Middle Eastern and North African countries like Jordan, Lebanon and Algeria containing assurances that deported people will not be subjected to torture or execution on their return.

That is all very well but it does not address the issue of returning people to war zones, like certain Somali thugs whose country has now degenerated into chaos.

Nor does it address the vexed problem of asylum-seekers who destroy their papers before presenting themselves to the immigration officials, making it impossible to determine their countries of origin and allowing their home countries to disown them.

These "minor" issues aside though, we have been here before. Responding to concerns about asylum seekers, the Conservatives floated the idea in autumn 2001 of leaving the European Convention of Human Rights (ECHR). This was repeated by Blair on the Frost Programme on 26 January 2003, and then again by shadow home secretary, following the prime minister's comments.

This would be a technical device, enabling the government to circumvent Article 3 – which prohibits a State from returning a person to a place where they might face ill-treatment – following which the convention would be ratified but with a reservation which would exclude Art. 3. 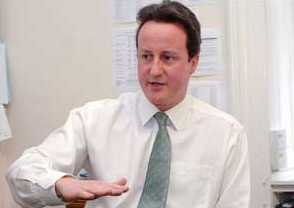 That option has been authoritatively debunked, but Cameron is not even going that far - he is only pledging to tackle the Human Rights Act. But its main effect is to make the ECHR judicable in the UK.

Without the Act, the ECHR still applies and aggrieved persons would still have the right to appeal to the Court of Human Rights in Strasbourg and, unless the UK withdrew also from the convention it would still be bound by the court's judgements. In other words, at several different levels, the Boy's pledge is simply gesture politics.

Former Europe minister, Denis MacShane, is certainly of that mind. In today's Independent, he says, "Cameron seems to have said this for the sake of a headline without thinking it through. You can tear up the British legislation, but that only means that cases will go to the European Court of Human Rights, so it doesn't actually do anything. But if Cameron is saying that Britain is going to withdraw from an international treaty, we will be out of line with every other civilised country."

More to the point, countries that withdraw from the ECHR automatically leave the Council of Europe, which means this is a move the Boy is unlikely to make.

And he will get no support from the prime minister. According to the Independent, his official spokesman indicated yesterday that it was the way the Human Rights Act is applied by the courts, rather than the legislation itself, which was causing public concern. "There is a need to reassure the public that common sense logic should be right through the legal system, so there is the need, if necessary, to rebalance the system so that happens," he said.