They can also see it 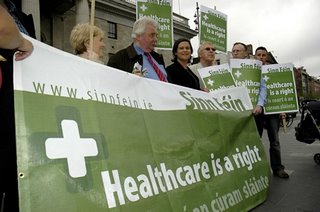 We noted earlier the strange lack of political response to the Watts judgement from the ECJ, two days ago, not least the facile, party-political point made by shadow health spokesman Andrew Lansley.

But, if the mainstream British parties don't get the point (or are intent on ignoring it), it has not been lost on the Irish nationalist party Sinn Féin. They have been quick into the lists, in a press release, asserting that the ECJ ruling "strengthens argument for all-Ireland health service".

The declaration that health service patients forced to wait longer than they should for medical treatment are entitled to reclaim the cost of being treated in other European countries, the Party says, will have far-reaching consequences for both health departments across Ireland.

It will means that health departments on both sides of the border "must now stop paying lip service to the establishment of an all-Ireland health service and start taking positive and concrete steps to make the creation of a single health service on the island of Ireland a reality." Spokesman John O'Dowd adds:

The harmonisation of health services on an all-Ireland basis would deliver major benefits for tens of thousands of people across Ireland. This is about ensuring the free-flow of patients, based on clinical need, from one part of the country to the other. It is about removing unnecessary impediments, which are preventing the harmonisation of health systems on the island, and delivering a modern, flexible service fit for purpose that can cater for the needs of all.

From his perspective, such an outcome is obviously desirable, but O'Dowd clearly has not thought it through. What applies on an all-Ireland basis clearly has the same force of logic when applied to a pan-EU level. Where there is a free-flow of patients across borders, the argument for a strategic, cross-border health authority becomes very powerful and highly attractive to the integrationalists.

As we observed last Tuesday, therefore, the Court's judgement was a significant step towards a European Health Service. That our politicians do not want to address this issue confirms further the degree of denial which infects the British body politic.