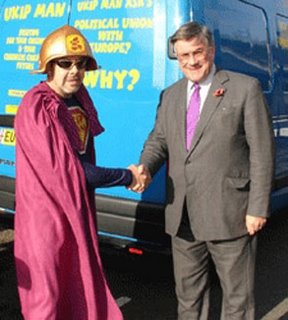 He has imported cheap east European labourers to renovate his West Country mansion, operating though his son, who runs a company that specialises in bringing foreign labour to Britain.

Over the past 11 months, says The Times, the Poles have been working 10 hours a day, six days a week, while living dormitory-style in Knapman’s attic. His son’s company claims east Europeans are up to 50 percent cheaper than their British counterparts.

Knapman, whose party was the only British group in the European parliament to vote against allowing east European states, including Poland, into the EU, boasted to an undercover reporter he could help supply Polish labourers to do similar work for British customers. He said using cheap foreigners is much better since “they work so much harder”.

The disclosure will surprise supporters of UKIP, which has warned that enlarging the EU to incorporate east European states would lead to a "flood of migrants" that would be "bad for Britain".

Its 2005 manifesto said the rate of immigration had to be stemmed because "the numbers of those permitted to enter legally has been rising sharply as a result of both the eastern expansion of the EU and deliberate government policy. The Labour government's untenable excuse is that we need large numbers of immigrant workers".

In public, Knapman, a former Tory MP, claims to take pride in supporting British business and boasts of owning two Rover cars. However, last week he told an undercover reporter that for the past 11 months he had been using a team of Polish workers to restore his grade II listed home in the west Devon village of Coryton. For much of that time he has had three or four workers, who have been provided with an old television, sleeping in his attic.

"They have a very good work ethic and work so much harder than anyone over here," he said. "You know they are not going to go off to another job as they are there specifically for you... Many workers here just aren’t skilled enough to do the work involved in renovating an old property. These men work 10 hours a day, six days a week and then we give them Sunday off. It's a 60-hour week, but they want to do it."

Knapman said he could help arrange teams of east Europeans to carry out building work through the firm run by his son William. "He will bring over some Polish workers according to what you need and they won't let you down," he said.

William Knapman runs Billdar, a Polish-registered company that sources east Europeans for jobs in Britain. The workers, whom he described as "like an army of ants", are paid about £50 a day — about half of the cost of a British builder.

William Knapman told an undercover reporter he used mostly Polish workers but also some Slovaks, Latvians and Swedes and quoted £4,000 for two men working for six weeks, from which the company takes an unspecified fee. "I think it's anywhere between 20 and 50 percent cheaper (than using British workers) doing it this way," he said. "The important thing is we’re not talking Monday to Friday, nine to five, with a tea break. They work 8am-6pm six days a week."

Roger Knapman said he would be employing the men, who have refurbished much of his property, for a further three months. When challenged yesterday, Knapman said there was "no contradiction! between what he was doing and the objectives of his party. On UKIP’s opposition to letting Poland join the EU, he said: “That is talking about political union, that is not talking about people working.”

When it was pointed out to him that they could freely work here because of the political union, he said: "I don't see that is relevant at all. We have three people who come here, they are very nice people and when they finish they go home."

Perhaps Knapman had better have a word with his fellow MEP, Godfrey Bloom. On his website, he declares:

And who is this "we", paleface?