I don't think so 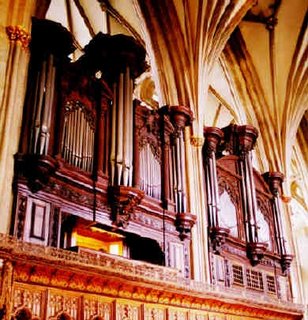 Even by its own terms of reference, this story is a tad mixed up - but then what do you expect from the Observer?

The substance of the story is welcome enough, reporting as it does that "Pipe organs saved from EU threat", an issue we raised when it was first brought up in March and again towards the end of that month .

However, on 30 March we also reported that the fragrant Margot had excluded organs from the framework of the WEEE and RoHS directives and, in the absence of a like response from this side of the Channel, it seemed that the obstacle was our government, not the commission.

Now – or so The Observer reports - in an apparent volte-face by the government, minister for energy, Malcolm Wicks, has said pipe organs should be exempt from the directive. "Our clear view," he stated, "is that pipe organs do not fall within the scope of the directive[s], and that view is widely accepted in the European Commission."

Yet, even having quoted Wickes saying that the government's view is "widely accepted in the European Commission," The Observer then goes on to suggest that it "puts it on a potential collision course with Brussels". But the truth rather seems that the government has come into line with the commission, the former rather than the latter creating the problem.

It is odd that The Observer does not seem to be able to cope with that.