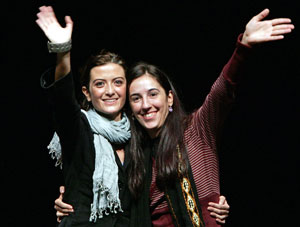 Baroness Nicholson, formerly known as Emma Nicholson, now a Lib-Dim MEP and Vice-Chairman of the Toy Parliament’s Foreign Affairs Committee, is justifiably unhappy. Countries are apparently behaving foolishly and she would like the European Parliament or the Foreign Affairs High Panjandrum, Solana do something about it. What they can do, remains a mystery but:

“She said she would put forward an emergency resolution and a parliamentary question to commissioner Benita Ferraro-Waldner, Austrian ex-foreign minister and the commissioner for foreign affairs in the European Commission.

She would also raise it with the EU foreign policy chief, Javier Solana.”

Loath though I am to say it, but she is right – paying ransom to terrorists is a very bad idea. Given how many different gangs there are in Iraq, many of whom appear to have no political ideology at all but think that kidnapping journalists, aid workers and the odd engineer is obviously a wonderful money spinner, governments that fall for this are endangering their own nationals first and foremost.

It was an article in the Times yesterday that created the fuss. Daniel McGrory maintains that the newspaper has seen documents that prove the handing over a total of $45 million by the governments of France, Italy and Germany in order to rescue their nationals.

This is not precisely a new story and we have covered it on numerous occasions. What Mr McGrory has provided is definite figures:

As it happens, I believe there is some doubt as to what really happened to Margaret Hassan.

Furthermore, as the article explains, Britain is not entirely blameless. Though the government, rightly, refuses to pay ransom, it gives in on other matters.

“British officials have been criticised for giving the kidnappers of the peace activist Norman Kember time to escape to avoid the risk of a gun battle with Special Forces troops sent to rescue him and his two fellow captives from a house in central Baghdad in March.

Only when Jill Carroll, an American journalist, was freed eight days later did intelligence experts discover that she had been held by the same notorious crime family, who were working with Abu Musab al-Zarqawi, the wanted al-Qaeda leader in Iraq. That revelation infuriated US officials in Baghdad, who had let Britain take the lead in tracing and freeing Professor Kember, 74, and his two Canadian colleagues.”

This is particularly annoying because of the difference in behaviour exhibited by Jill Carroll, on her release, and that of the grumpy and ungrateful peace activists.

The three governments continue to deny the payment of ransom but give no explanation as to why their hostages were released on those dates.