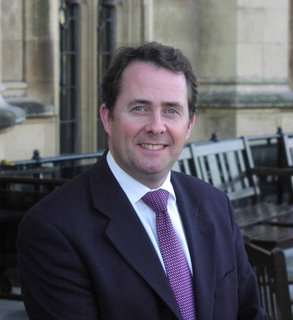 "What is the point of defence?" That is the question asked by shadow secretary of state for defence, Liam Fox, in a speech this morning at Chatham House on "the challenge of defence and energy security".

In his speech, Fox turns the defence issue into one of protecting our energy supplies, pointing out that we are no longer self-sufficient in energy. Therefore, he says, energy security now acts as a driver of foreign policy and, in defence terms, we have to "balance our security through … effective military structures to underpin our diplomacy".

That much is hardly new – it has always been thus – and it is thus self-evident that, as Fox says, "an indivisible energy security and national security policy will inevitably have consequences for the necessary shape and capabilities of the armed forces required to serve those interests". Fox then goes on to declare, very much in the same vein, that:

Politicians need to provide a very much clearer framework within which national security interests can to be served. In other words. We need a foreign policy out of which a credible defence policy – rather than merely spending plans – can flow.

So far, so good but what Fox then dismally fails to do is set out in any detail – or at all – the specifics of that framework, or how it would impact on our current defence policy.

What he does tell us is that he wants to develop global associations with nations and regions that can contribute to countering the key threats to our energy security, directed primarily through NATO – something which he acknowledges would put us at odds with EU ambitions. But as to our defence policy, all we get is that our approach to energy security must be "underpinned by a security margin of resilience which only updated global military structures can provide".

What that actually means is anyone's guess – and is it any wonder that we are so despairing (and contemptuous) of politicians when they cannot express themselves with any clarity? But, insofar as there is any meaning in the words, Fox seems to be making a pitch for greater seapower to protect our energy supply lines, working closely with a range of allies that includes the USA, Japan, and other players within the Pacific region.

If that is the case, Fox has a problem. The bulk of our future naval equipment plans, including the purchase of the two aircraft carriers – for which further design contracts were recently awarded - are currently predicated on building up an expeditionary force to support the European Rapid Reaction Force, a force which is (or will be) primarily dedicated to fulfilling Petersberg Tasks.

This is not a force which will be capable of projecting seapower or one with any significant independent global reach – and neither is it one designed to mesh with US or Pacific forces.

As to the Army, huge expense – some £16 billion - is being devoted to re-equipping it as an expeditionary force, with a rapid reaction capability, again with a view to it becoming a component of the ERRF. The RAF, on the other hand, is primarily equipped (with the Eurofighter) for a static, air superiority role.

None of the intended armed forces structures would seem at all capable of undertaking the primary role of protecting our energy supply lines and, given the necessary limitations on our defence spending – and the huge cost of equipping a credible expeditionary force – we do not have the cash to spare for both roles.

It is all very well, therefore, for Fox to argue the need to provide a much clearer framework but, as it stands, the framework set by the current administration for future conduct of operations is that of an integral part of the ERRF.

From that stems procurement decisions with a multi-billion price-tag and a reach of twenty years or more, committing us to the strategy thus defined. Unless Fox is prepared to gainsay the current structures and commit to a fundamental restructuring of our forces, should the Conservatives gain power, what he is actually saying is so much hot air - he will not be able to deliver.