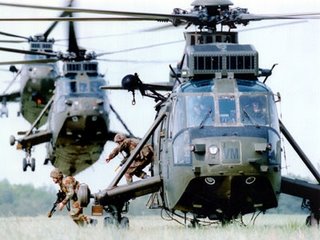 It is a bit of the bloody nerve for The Telegraph to start pontificating now about the poor state of kit supplied to our armed forces deployed in Afghanistan and Iraq.

This is a newspaper which – like most of the MSM – has retreated from any serious commentary on defence matters, its greatest concern in recent months being our Forces' underpants and cap badge designs (and here).

For sure, one cannot disagree with the thrust of its front page story, which claims that the lives of troops will be put at risk if the Ministry of Defence goes ahead with plans to refurbish a fleet of vintage helicopters as a cost-cutting measure.

Some 30 former Royal Navy anti-submarine Sea Kings helicopters, it seems, are about to be taken out of mothballs for service in operational areas, pressed into use as troop transports. It is feared that their low speed and poor performance in the desert heat would make them "sitting ducks".

Furthermore, it is impossible to disagree with the sentiments expressed in the leader, headed "Lions equipped by dinosaurs", which, for the first time in recent memory, offers of critique of MoD procurement policy. "There are several structural reasons why our defence procurement is so woeful," it says:

First, it operates without any market discipline. The MoD is a monopoly purchaser, and BAE Systems comes close to being a monopoly producer. During the 1980s, Tony Benn was struggling to explain why capitalism had not collapsed under its own contradictions, when he hit on the answer: defence procurement, he realised, was conducted on Marxist principles. Not only is the MoD protected from competition; it is also shielded from democratic accountability. Very few MPs go into politics because they are interested in weapons systems.

In consequence, defence ministers tend to play it safe, invariably following the advice of their officials. We thus have one of the purest forms of producer capture in Whitehall. The old saw about generals gearing up to fight the last war is an almost perfect description of current procurement policy. The Navy is good at defending the Atlantic sea-lanes from Soviet submarines. The RAF, now hugging itself with glee over the preposterous Euro-fighter, is ready to beat off a massed assault by MiGs.

The Nato command structure, to say nothing of the EU's growing military role, more or less guarantees that our strategic thinking remains Euro-centric and that we are not especially well prepared to garrison Iraq or Afghanistan. The misallocation of resources within the MoD means that we lag behind when it comes to drones, advanced satellite systems, high-tech missiles and modern military computers.

It then concludes that, "until procurement properly accountable, the problem will remain. Our Servicemen deserve better than this".

Actually, as readers here will know, that is only the half of it. The Telegraph cites the admirable book by Lewis Page, Lions Donkeys and Dinosaurs, which sets out some of the more egregious procurement disasters, but neither the newspaper nor Page address the European issue, set out in my pamphlet The Wrong side of the Hill. There, I identified £5.8 billion wasted on overly expensive or unnecessary European procurement projects, in pursuit of the hidden Europeanisation of Britain's armed forces – not counting the colossal waste on projects like the Eurofighter. It is there that we see a massive "elephant in the room" which is sucking the lifeblood out of our Forces.

But, while we can be critical of the Telegraph for its late and wholly inadequate response (and the other media), we must also focus on the ranks of useless MPs who have largely ignored defence procurement issues. It has been left largely to the likes of shadow procurement minister Gerald Howarth and back-bencher Ann Winterton to make the running. Admirable though their efforts have been, they have not been enough, without the support of the wider House.

Thus, while the media should be ashamed, our MPs should be more so, for letting the government get away with what can only be regarded as a dereliction of duty.