The emasculation of common sense 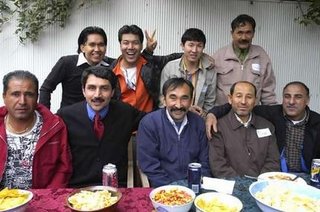 It may seem a million miles from the issue of Afghan asylum-seekers hijacking an airliner to escape from a totalitarian regime, but it isn't.

A long time ago – everything seems to be a long time ago now – back in the days when I was a lowly sanitary inspector, I was called to a house by its elderly tenant, complaining of dampness.

The house was more than damp – it was dreadful. In the shadow of a huge factory, one you could easily describe as a "dark satanic mill" – which had since been taken over by an engineering firm making parts for oil rigs, and working 24 hours, with constant noise – the house never saw sunlight. It was dark, depressing and, in my view a Victorian throwback, entirely unfit for human habitation.

Our council housing policy at the time allowed for rehousing under such circumstances, and I was convinced the lady was not long for this world if she was forced to endure such conditions. She had a doctor's certificate to that effect, so I advised her to apply for a council house, and helped her fill in the forms, adding my recommendation.

That should have been it but months passed and there was still no movement, with the lady's health deteriorating rapidly. On making enquiries, I discovered the housing department had lost the forms, so we filled in another set. Again months passed, only for us to discover the same thing had happened.

Losing patience, I did something which was definitely in breach of my contract of employment – I tipped off a local journalist who next day spread the story all over the front page of his rag. There was hell to pay, with local councillors jumping up and down in anger. The lady was rehoused in a week, in delightful sheltered accommodation, where she lived a happy life for several decades more.

There were no court cases, no inquiries, no breast-beating about procedures and "human rights". Simply, the combination of media activism and local politics worked, in a common-sense way. A wrong was put right.

As the risk of trying our reader's patience, let me offer another example. This one was a single mother, in council accommodation, with what we call now a "special needs" child – actually a young adult. We used to describe them as "mentally retarded".

Anyhow, the "child" was hyperactive and some well-meaning official had recommended he was given a pet to keep him occupied. The mother bought him a large rabbit but the child had immediately slaughtered the poor creature and, from the attic, had stuffed the carcase down the cavity in the walls of the house. There, it had rotted, filling the house with an unbelievable stench, accompanied by a huge infestation of blue-bottles.

Distraught, the mother sought temporary rehousing, but there was no provision for this in the rules. I found, however, that she was entitled to a transfer and could have the keys of an alternative house for ten days, in order to make up her mind whether she wanted it.

The lady did not want a transfer but, with a nod as good as I wink, I collected the keys, borrowed a van from the works depot and moved the family into the new accommodation. Ten days later, when the stench and flies had dissipated, I moved her back and returned the keys of her "transfer" to the housing department, telling them that she did not want the house. Every rule in the book had been broken, but common sense had prevailed.

And that, as indeed our revered prime minister notes, is what is missing in respect of the Afghan asylum seekers. It is all very well listening to the sonorous words of the learned judges who, having applied their fine legal minds to the letter of the law, decided that these people had been wronged. But, whatever the legal detail, it flies in the face of common sense to suggest that hijackers, armed with explosives and guns, can benefit hugely from their actions and escape without any adverse repercussions.

Looking at it pragmatically – bearing in mind, or so we are told, that they were fleeing for their lives – one wonders whether or not a deal could not have been done with these people. Had it been discussed with them, would they have been amenable to a "token" sentence in a British jail, to show official disapproval, followed by relocation to an agreed site in, say, on the Pakistan border, with the lubrication of a small grant to the Pakistani authorities? After all, from what we are told, the court cases to date have cost over £10 million, and such a settlement would have been cheap at the price.

This, of course, is wholly speculation but one knows, intuitively and from experience, that once the lawyers get hold of a case, it is going to rack up zillions in costs and lead to an absurd outcome. Somewhere, somehow, my gut feeling tells me a sensible deal could have been brokered.

That it was not, it seems to me, encapsulates much of what is wrong with our society and goes to the heart of our objections to the European Union. The basic flaw is that groups of people, at local, national and international level, have fallen into the trap of believing that the whole gamut of human activity, and every set of circumstances, can be defined, circumscribed and regulated by a tightly-crafted set of rules, administered and interpreted by dispassionate officials and learned judges.

This, these misguided fools often claim to be the "rule of law". They pride themselves in their "rule-based" organisations and their adherence to their laws and procedures, wholly unconscious that in their blinkered obsession lies madness. The richness and diversity of human behaviour defies something so simplistic as a single set of rules. For harmonious living, and justice, it requires constant flexibility and adaptation, something which no rigid code can ever achieve.

Alright, it's Saturday, it's raining and you've nothing better else to do, so one more example. On my patch, I had a delightful – if you can use that word – traditional village butcher, with a slaughterhouse at the back. The "slaughterman" was in fact an eighty-year-old lady and, once a week, she would buy a beast from the market and keep it in her paddock. On the Monday, she would lead it to the slaughterhouse, kill it and butcher it, and then sell the meat in her shop.

Then, along came the officials. The slaughterhouse did not have the lairage required by EU regulations, or all the equipment that went with it, so it could not be licensed. The costs of such an unnecessary provision would have been many thousands – clearly an uneconomic proposition, so the slaughterhouse was closed down. And with it went the butcher.

This is why I have no time for the mantra, "the law is the law and must be obeyed". The law is for the obedience of fools and the guidance of wise men. When the law gets in the way of common sense and wisdom – to say nothing of humanity and justice - the law should be ignored.

Then, in the final analysis, when something is clearly and egregiously wrong and requires formal adjustment, the remedy should be in the hands of politicians rather than the lawyers. They are the ultimate (in theory) guardians of our democracy and only they can be held to account, however imperfectly.

Thus, in its leader today, the Telegraph has got the right. "Freedom's best guarantor is a sovereign parliament", it says. I don't agree with all the argument but the essence is there. Laws – the rules of our conduct – are too important to be left to lawyers.

Finally, though, scrapping the Human Rights Act is not the answer – or not the complete answer. We need to reinvent that increasingly rare commodity – common sense.