The UN hits out at the US 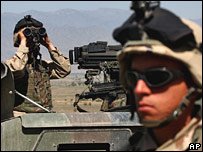 One of the least surprising pieces of international news was reported on the BBC and Al-Jazeera (with the latter providing a far more balanced and straightforward coverage than the dear old Beeb). The story has since been picked up by just about every other western news service and will, no doubt, be chewed to death in the evening news broadcasts.

The United Nations Committee against Torture has ordered the United States to close down Guantánamo and various other prisons where suspected terrorists are housed.

It has also insisted that the detainees, released or otherwise, should not be sent to countries where they might be tortured or maltreated. This presents certain problems, since most of the detainees, who had simply been taking a holiday in Afghanistan, carrying large amounts of ammunition and explosives as anyone would, come from countries where they are almost certainly going to be maltreated.

In fact, a number of ex-Gitmo inhabitants have been sent back to Russia (though they begged not to), where they promptly disappeared. A similar fate befell those that were sent back to France. Several released detainees are still in Guantánamo because they have nowhere to go, their home countries being somewhat unpleasant and the very liberal European countries, who are always ready to criticize the US, not wanting, understandably, to take them in.

Not content with making idiotic suggestions of that kind, the Committee, which consists of 10 “independent” experts (more of them below), has also demanded that the United States create a federal crime of torture, having professed itself to be pleased but not entirely satisfied with assurances that torture was not allowed to be carried out in American prisons or by American officials.

The truth is that unlike some other countries, the United States actually prosecutes those who are accused of torturing prisoners. The idea of making something a federal crime because a United Nations committee says so is abhorrent to that country as wishes to preserve its independence and democratic accountability.

That and other demand “to broaden the definition of psychological torture” are nothing but variants of our old friend: the tranzi demand that the constitutional and democratically elected government of the United States submit to the authority of a completely unaccountable body, made up of international “experts”, part of a seriously corrupt and unreformable organization. We have written about the UN and its shenanigans often enough on this blog.

While we are on the subject of experts, let us have a look who are the members of this Committee at the moment. In the past they have had representatives from DR Congo and Egypt, among other countries where human rights are highly respected.

The present 10 members are:

Those one can check back on are not precisely experts on anything but officials either in the human rights business, such as the American representative or just the government, as the Latin American ones.