"Those are words on paper…" 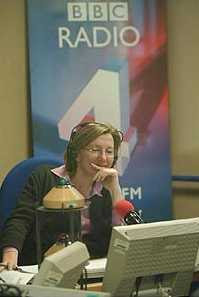 If the Tory Party and their little groupies have not understood the significance of the changes to the European Council proposed in the new treaty, sucking it into the maw of the Union as a fully fledged institution, to become part of the supreme government of Europe, the "colleagues" certainly have.

They must, therefore, have been wetting themselves over Booker's outing of their scheme in his column yesterday, so much so that they had the BBC Radio 4 Today programme rushing in this morning with a damage limitation exercise, attempting to minimise the impact of the Booker analysis.

To do so, they enlisted the ever-willing Sarah Montague who, in the typical fashion of the BBC, used the two-handed interview in the attempt. First up was Gisela Stuart, "a Labour MP who was part of the group that drew up the European constitution." She was followed by Robert Jackson, a Tory renegade who joined Labour "because of the Tories' opposition to Europe" - and husband of Caroline Jackson, Tory MEP.

I have posted the full transcript of the interview on our page two, under the heading, "Damage limitation".

Needless to say, even though Booker has been the only journalist to write about this issue, the Today programme does not mention the column, much less this blog, which has made the running (they could not possibly soil their elegant little tongues with such a mention). Instead, as Sarah Montague tells us that the European Council is to become one of the Union's formal institutions, all she will concede is that, "Some are saying it's a huge change that will dramatically shift the balance of power." 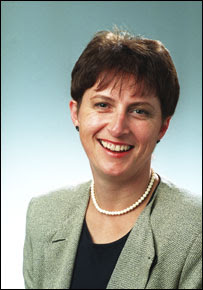 Gisela Stuart then does a very creditable job explaining the issues, telling us that the treaty:

…makes them now part of it, the way like, for example, a federal state like Germany would have a directly elected parliament but there'd be another institution which represents the federal component. We in the UK, we have Parliament and the Lords, the two chambers. What this new structure does, is that body where heads of state meet, they become subordinate to the Union's interests, become part of that working and they will now have a duty to represent the interests of the Union, the interest of the member states. And the third and much more interesting element is that the constitutional treaty will potentially allow for that president of that body also to be the same person as the president of the commission. Therefore it's a consolidation of the way the Union works into a structure that is much more like a government.

This is but a foil for Robert Jackson, who then, in a torrent of unmitigated tosh, proceeds in an attempt to demolish the case, entirely unchallenged by Montague. In the sneering tone so often adopted by Europhiles, he actually has the gall to tell us that the treaty is consolidating intergovernmentalism.

Very few listeners, of course, would have had the first idea of what Jackson was talking about so the absurdity of his position would not have been apparent to them. 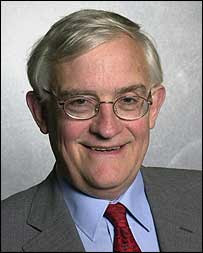 The point about the European Council is that, as long as it was not formally incorporated into the Union as an institution, has been an intergovernmental organisation. But the very fact that it becomes a formal institution, subject to the rules and procedures of the Union, now means that it becomes a fully-fledged supranational body. Jackson is arguing black is white.

The half-witted Montague, of course laps this up, allowing Jackson further to confuse the issue, setting up a huge smokescreen by claiming that "this draft treaty is a final consolidation of the development to an intergovernmental system based on the member states."

This gives Montague the cue to put to Gisela Stuart that it is difficult to believe that the heads of government of the member states "they suddenly leave their responsibilities for acting for their own countries at the door and suddenly start thinking, acting for the EU".

Gisela, rightly, starts talking about the "dynamics of power" but her point is far too complex to be argued through properly in the short time allowed her. But it is the whole conditioning process of the European Council “experience” which conditions its members and whips them into line.

Perhaps, one day, a learned academic psychiatrist will write a paper on precisely how it is that heads of government do indeed "suddenly leave their responsibilities for acting for their own countries at the door and suddenly start thinking, acting for the EU" – as they did when they agreed the treaty "mandate".

But, with that point far from made, Jackson is allowed the last word, coming up with the classic line of the mendacious Europhile. "Gisela's point about legal duties to further the interests of the Union," he says, "those are words on paper."

This is the classic line. The very legal framework of the Union, its treaties on which the "colleagues" so much rely to force member states into positions they would rather not accept, Jackson dismisses as "words on paper". This is the way these liars work. Black is white and, when it suits them, treaties are simply "words on paper" – until, of course, they are in force when they become "solemn treaty obligations".

However, such is the speed with which the "colleagues" have reacted to Booker that it is obvious that we have touched a raw nerve. And, since no longer is the BBC dominating the agenda – in fact, they are reacting to ours - this is obviously the issue to push as hard as we can.