A supreme government of Europe 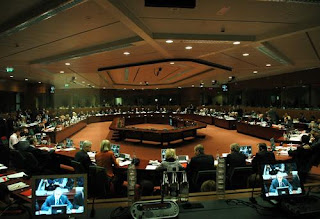 Now that the official English version of the revamped constitution - the so-called "reform" treaty - has been published, we can get down to studying it in detail. And, as one of our forum commentators noted, we should avoid getting bogged down in the detail. As he wrote, "getting lost in the nitty gritty of EU law can lead one to missing the bigger overall picture."

The bigger overall picture is, in fact, hidden in plain sight, in the very first line of the preamble, which states: "Recalling the historic importance of the ending of the division of the European continent …".

This is, in fact, the equivalent of "towards ever closer union …" introduced in this form in the Nice Treaty, and not there by accident. It highlights the fundamental aim of the "reform" treaty and all those that preceded it – political integration.

It cannot be emphasised enough that that is the primary purpose of all EU treaties. They may aim to accomplish other things (such as "streamlining" the text) but those are always secondary, no less than in this "reform" treaty.

Now, for there to be a political union – and that is the ultimate objective of the European Union – it must have a government which has supreme authority over all the governments of the member states. Its development started with the Treaty of Rome, amplified by case law from the ECJ (which established the supremacy of community law), and it continues apace in this treaty, bringing the government close to the finished state.

This is to be seen in a new Article 9 of the treaty where the "Union's institutions" are set out. And it is here that the genius of the original draftsmen must be acknowledged, in their use of an anodyne term "institutions". Although linguistically correct, the more precise term would be "government". The moment you use that word, everything falls into place.

Turning to this new Article 9 then, we see the following, with our amendments (in italics) to make the text more precise:

1. The Union shall have an institutional governmental framework which shall aim to promote its values, advance its objectives, serve its interests, those of its citizens and those of the Member States, and ensure the consistency, effectiveness and continuity of its policies and actions. The Union's institutions government shall be:

By comparison with the previous treaty (Article 7 TEU), we see two additions, the European Council and the European Central Bank, both of which existed in previous treaties but now become fully-fledged institutions – i.e., part of the government – of the Union.

The key change, though, is the addition of the European Council. The significance of this, we have rehearsed in detail but certain elements bear repetition.

In short, the heads of states and governments of the member states, who comprise the European Council, cease to represent their own member state interests and become absorbed into a tier of the EU government, bound by its laws and obliged to further the aims and objectives of the Union.

This is actually set out in the first part of the paragraph, which states that it (and the rest of the government) "shall aim to promote its (the Union's) values, advance its objectives, serve its interests, those of its citizens and those of the Member States…".

It is no coincidence that that, in the pecking order, the Union comes first, the "citizens" second and the member states third and last. That states the priorities and the order of preference. By this means, our heads of states and governments become subservient to the European Union.

The same, incidentally, applies to the council (of ministers). Currently, the commission website tells us that:

…each minister in the Council is answerable to his or her national parliament and to the citizens that parliament represents. This ensures the democratic legitimacy of the Council's decisions.

This is only theoretically the case but, under the new treaty, it can no longer be so, even in theory. As members of the EU's government, each minister is bound by treaty to "promote its (the Union's) values, advance its objectives, serve its interests…" before those of their citizens and own states. They no longer represent their states, but the European Union. They are not accountable to their own parliaments or peoples, but to the ECJ.

As we observed earlier, anyone who is looking for a change in the fundamental relationship between the European Union and the member states should start here, with Article 9.

All the "colleagues" need now is an elected president of the European Council (which will surely come if this treaty is not stopped) and they will be there.