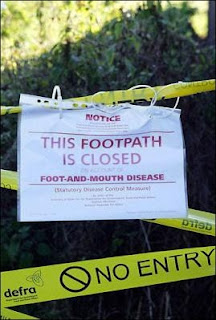 Listening to the midday radio news, having turned on the radio a few minutes into the bulletin, I heard a speaker talking about the foot and mouth outbreak and the emerging government failures in their supervision and control of the research and vaccine establishments at Pirbright. Increasingly, these seem to be the source of the outbreak.

Intrigued, I listened to the end of what turned out to be an interview and, amazingly, it was indeed the Boy. Which just goes to show, I suppose, that if the man sticks to what was evidently a good brief, and cuts out the histrionics (and that wheedling tone he uses when he is trying to present himself as soft and cuddly), he can make a half-way respectable politician. (Tory Boy blog has a reasonably well-crafted statement from the Boy.)

Anyhow, if this outbreak really does originate from Pirbright, then there is a good likelihood that the infection will not have spread far. That means that even Defra vets have a good chance of containing the disease. That is some considerable relief as I was dreading having to clear the decks, as we did last time, not least writing with Booker what some consider to be "not the definitive report" on the 2001 epidemic (while my co-editor toiled with the Countryside Alliance). Already, much of yesterday was spent updating knowledge and going through the current legislation and reports.

To have had to continue this for some weeks or months at this time would have been extremely unfortunate, to say the least, as this EU treaty constitution is going to take a lot time and effort if it is to be defeated. Therefore, we will leave the day-to-day reporting of the current foot and mouth episode to the excellent Warmwell site run single-handedly by the amazing Mary Critchley, our admiration for whom knows no bounds.

We will look in at the issue occasionally but, for us, it is back to work.