China on the brink 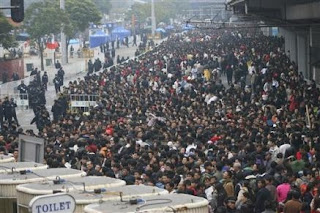 We are used to being told to think of China as an emerging superpower, set to top the league of the world's economies in the not too distant future. But the piece in The Daily Telegraph by Richard Spencer in Beijing should give some pause for thought.

This actually makes more sense if it is read in conjunction with our piece in December, the combination of which suggests that the Chinese economy is much more fragile than is generally reckoned. In fact, as our title indicates, all the signs are there that China is on the brink.

Spencer’s piece is headed, "Chinese snow crisis hits food supplies" and his account is well detailed, citing Chen Xiwen, the government's leading expert on the agricultural economy. He says the long-term effects of the weather were looking "ominous". "The impact of the snow disaster in southern China on winter crop production is extremely serious," he says. "The impact on fresh vegetables and on fruit in some places has been catastrophic."

This is borne out by government figures said that snow had destroyed crops on 3,000 square miles of land. Wholesalers in Beijing have reported that supplies of some foodstuffs have been down to a fifth of normal levels. In areas directly affected by the snow, such as the central industrial cities of Wuhan and Changsha, food prices have reportedly already doubled.

This is on top of the extraordinary scenes at Guangzhou with 800,000 would-be rail travellers stranded in shelters (pictured). We are told that the travel plans of some 105 million people are affected - 45 million more than the total population of Britain. Millions are stranded on roads, stuck on slow-moving trains or in temporary shelters around railway stations. On top of that, a staggering 150,000 homes have collapsed and another 650,000 have been seriously damaged, 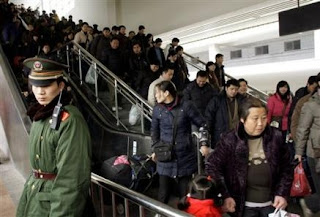 Turning to our previous piece, there we recorded the view of the BBC Radio 4's correspondent who warned that there was a risk of "food riots in China" in the coming year - and that was before these current travails.

Then, from Adam Leyland, editor of The Grocer magazine, we get a reminder that, "China is not insulated from world markets." He says that, "Increased demand for certain staples in China has had an effect on global prices," as indeed has been observed many times during the last year.

As you would expect, the Chinese authorities are trying to put a brave face on the troubles but, given you could detect more than a whiff of crisis in Chinese Premier Wen Jiabao whirlwind visits to farms and rural enterprises in the northeast province of Shaanxi last year, the situation must now be even more taut.

From the British (and European) perspective, we have become used to low commodity prices and the flood of cheap consumer goods from China. That, and the availability of cheap migrant labour have underpinned price stability in this country and kept inflation in check.

Problems in China, therefore, will have significant repercussions here, especially if the effects on Chinese food production lead to more imports being sucked in to relieve shortages – as seems likely. If that also leads to political instability – which also seems likely – the knock-on effects could be even more dramatic, if unquantifiable at this stage.

We are, it seems, about to experience the (rather appropriate) Chinese curse of living in "interesting times".