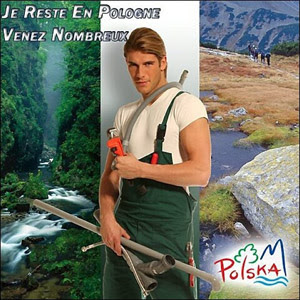 According to The Times, the wave of immigration that helped to fuel Britain's early 21st century boom is over, as the Polish plumber and thousands like him go home.

The paper claims to have established that, for the first time since they began arriving en masse four years ago, more UK-based Poles are returning to their homeland than are entering Britain.

This is based on statistics which show that only 38,680 Poles signed up to the government's register of migrant workers in the third quarter of 2007, a slump of 18 percent from the previous year. Polish officials also say that Poles leaving the country outnumber those coming in.

The Times tells us that the proximate cause of the outlow is the deteriorating economic situation in the UK, the strength of the zloty and an economic boom in Poland, all of which are eroding the advantages of emigration.

Although this may be applauded in some quarters – not least by those who complain that the immigrants are taking "British" jobs, the fact is that the Poles have in many cases taken up jobs which indigenous workers have been unwilling to do, or have filled skills shortages generated by the failures of our own education system.

Whatever the view taken, there is another uncomfortable fact. Gordon Brown's apparently (more apparent than real) successful management of the economy – and in particular, the holding down of headline inflation – has relied on three factors: the long run of low global commodity prices; the inflow of cheap consumer goods from China; and the ready availability of cheap, and relatively skilled immigrant labour.

Already, the first two legs of this "stool" have been kicked from under the chancellor-turned-prime-minister. Now, the last leg seems to be crumbling. If the net outflow turns to a major exodus, the last restraint on runaway inflation will have been removed, the economic impact of which could be dire.

In the not too distant future – for those who actually realise what is going on – one can see a situation where we may well regret the loss of our Polish plumbers.