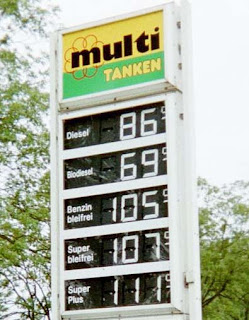 Rhetoric is one thing but – to no one's surprise – economic reality is another. According to Reuters (via The Guardian), both Germany and France are demurring at the potential cost of dealing with global warning.

The governments of both have been lobbying their central government in Brussels, telling the commission that its plans to cut industrial greenhouse gas emissions risk sacrificing European jobs.

Europe should lead by example but must not "change the competitiveness of our economy and our companies" by adopting tougher pollution measures than in other parts of the world," says Herve Novelli, France's junior minister for industry.

Not only that, Luxembourg, Finland, Austria, Hungary, the Czech Republic and other countries have all written to the EU industry commissioner Günter Verheugen, to ask for "swifter decisions" on how the EU plans will affect big energy consumers.

And, in a show of solidarity, Germany's deputy economy minister, Bernd Pfaffenbach seems to be telling anyone who will listen that his country's priority is not "climate change" per se but to press for free carbon dioxide emissions rights for big power consumers.

Meanwhile, Germany is reported to be considering dropping plans to double the amount of biofuels in gasoline after warnings that more than a million cars are not biofuel compatible.

The German automobile association ADAC has warned that up to 1.5 million drivers will be unable to use the ethanol-richer gasoline. This is according to Deutsche Welle which says that the plan to increase biofuels from five to ten percent was based on statistics that estimated 375,000 car owners would be adversely affected.

Environment minister Sigmar Gabriel has been quick to respond, saying that the ten percent blending rate would be dropped if ADAC's statistics are found to be correct.

Then, on the biodiesel front, the situation is descending into farce. Gone are the heady days when German truckers were piling into this "green" fuel, attracted by the price differential (illustrated). Instead, it is now more expensive as the government has raised taxes on the fuel, declaring that it cannot lose the large tax revenue from fossil diesel.

As biodiesel has eight percent less energy content than its fossil equivalent, no-one is buying biodiesel. Says Peter Schrum, president of the German renewable fuels industry association BBK: "The market for biodiesel at petrol stations is dead. The industry is basically producing a small amount for blending."

The journal Petrol World is thus reporting that three German biodiesel production plants were recently sold to the United States and Canada. More are up for sale and Schrum estimates that 30 percent of Germany's biodiesel plants are now up for sale. The country's five million ton biodiesel industry is only producing at about ten percent of capacity.

This drives a cart and horse through the EU's ambition to impose a quota of ten percent biofuels by 2020, a target with the leaders of the EU member states themselves agreed at last year’s March European Council. But, as we reported earlier, once reality begins to intrude, noble sentiments begin to evaporate like the mist on a summer’s day.

For the moment, Germany is trying to mitigate the effects of its tax hike by requiring the compulsory blending of biodiesel with fossil diesel. But a high proportion of the biodiesel used for blending is coming from the United States and is being sold cheaply in Europe with the help of US subsidies.

This we picked up earlier this month, a phenomenon which is having an interesting, if unintended side effect.

German biodiesel is largely made from rapeseed oil and huge volumes of high-protein rapeseed meal, a key animal feed, are produced as a by-product. If oil is not produced for biodiesel then protein feed will not be produced either and the requirement will have to be met by more expensive imports, probably of soymeal (which is in short supply and increasing rapidly in price). Furthermore, because there will be no market for it, large volumes of German rapeseed will have to be sold abroad.

Thus, from the EU's obsession with global warming, we can see all sorts of stresses building up, with resistance from member states to implementation of plans they themselves have agreed in principle. This definitely puts the EU on the line. To maintain any credibility, it will have to trying to force member states to comply with its plans but, as the economic situation gets tighter, this will prove extremely difficult.

We have always felt that global warming could prove the nemesis of the EU and, if these current problems are any guide, we are starting to see the shape of things to come.