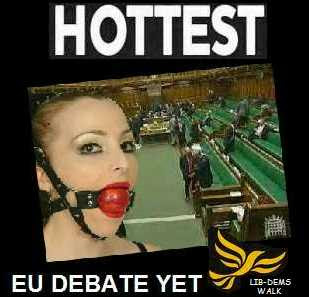 According to Sky News - and a brief report on BBC Radio 4 news - the Lib-Dims have walked out of the Commons.

This was after their foreign affairs spokesman Ed Davey had been ejected from the chamber after repeatedly protesting at the deputy speaker's decision to refuse to accept their amendment on an "in-out" referendum. He was then followed by the rest of his party. Comments on Conservative Home are interesting.