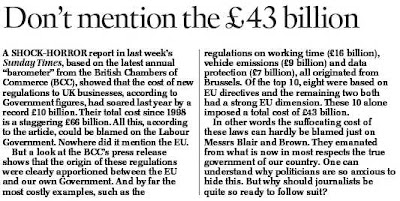 Two apparently unrelated columns in The Sunday Telegraph are both playing variations of the same tune – unrestrained and costly bureaucracy.

The first is the Booker column (above) which points out something which The Sunday Times failed to do last week.

That singular omission related to the latest annual "barometer" from the British Chambers of Commerce (BCC), which showed that the cost of new regulations to UK businesses, according to Government figures, had soared last year by a record £10 billion.

Their total cost since 1998 is a staggering £66 billion. All this, according to the article, could be blamed on the Labour Government. Nowhere did it mention the EU.

But, writes Booker, a look at the BCC's press release shows that the origin of these regulations were clearly apportioned between the EU and our own Government. And by far the most costly examples, such as the regulations on working time (£16 billion), vehicle emissions (£9 billion) and data protection (£7 billion), all originated from Brussels.

Of the top ten, eight were based on EU directives and the remaining two both had a strong EU dimension. These ten alone imposed a total cost of £43 billion.

In other words, Booker notes, the suffocating cost of these laws can hardly be blamed just on Messrs Blair and Brown. They emanated from what is now in most respects the true government of our country. One can understand, he concludes, why politicians are so anxious to hide this. But why should journalists be quite so ready to follow suit?

So much for the EU and, incidentally, the continuing failure of the media to shine a light on the elephant in the room, but another journalist toiling in a neighbouring vineyard is Alasdair Palmer. He has a column entitled, "A terrible week. That is, business as usual" which takes on the domestic quangocracy, culminating in the following:

One of the central political problems of our time is how to stop the expansion of parasitic, useless bureaucratic activity that slowly but surely drives out and replaces useful and productive work. Civil servants may have the best wills in the world - but it's not their money, and they are hardly ever made to suffer any significant consequences for wasting it …

The result of being able to spend other people's money without having to take any responsibility for wasting it is wholly predictable, indeed unavoidable: it's more waste, more incompetence, the proliferation of state agencies and, of course, higher taxes …

How we change that I do not know - but we need to, and fast.

Actually, the answer is relatively simple – even if the execution is not. We need to restore accountability to the system. As it stands, the march towards depoliticising of governance has led progressively to the handing over of powers to the unelected technocrat, at both domestic and European level.

This has robbed politicians of meaning and purpose, leaving them to internalise. Politics has become an end in itself, rather than a means to an end. Those attracted to power quickly realise that they have none and therefore – much as Blair has done – devote their energies to personal enrichment, or simply the pursuit of the political game, just for the sake of it.

The answer then is for Great Britain to withdraw from the European Union – a necessary but not sufficient precondition for the restoration of parliamentary democracy – and then to abolish the quangoes. Combine that with a retreat of the state from its attempts to micro-manage increasing areas of our lives, reduce taxes and wind down the welfare state, and we might be getting somewhere.

Anything else is simply tinkering at the margins and, until these things happen, it will be, as Alasdair Palmer laments, "business as usual".