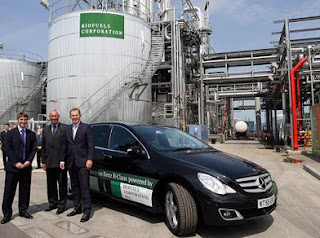 Another entertaining little scrap is developing between the European Union and the United States as news comes in that the growth of EU biodiesel output slowed to not more than 10 percent in 2007.

This was, or so it is claimed by Raffaello Garofalo, secretary general of European Biodiesel Board (EBB), partly a result of increasing competition from heavily subsidised US biodiesel. The low growth in 2007 has, apparently, been worst in the past ten years, with the previous year having shown a surge of 54 percent to 4.89 million tons.

However, Garofalo says the slowdown was not entirely due to increasing imports of US biodiesel but also the lack of political support for fuel in some EU member states.

Nevertheless, it is to the US that the EBB is directing its wrath, claiming that the subsidies are "unfair", arguing that it is dumping the product on the European market and threatening to put many EU producers out of business. The existing EU capacity was only 50 percent used in 2007.

This, in fact, is a long-running issue, reported last October, when the EBB were considering taking legal action against the US through the WTO.

The irony is that US producers can claim not only subsidies from their own government but from the EU as well. Under the US legislation, that can get $264 per cubic meter, or about €200 per ton, by adding a "drop" of mineral diesel to biodiesel. Then, when it is exported to Europe, it is eligible for EU subsidies worth 11p a litre, or $300 per ton.

Concern increased in December when the EBB backed a formal complaint to the EU commission, asking Peter Mandelson department to carry out an investigation into the trade and to cut the EU subsidies to US imports.

Mandelson then was thought to view the industry’s predicament favourably, especially as imports of biodiesel from the United States had soared from about 100,000 tons in 2006 to about a million on 2007, in a market that can only absorb 4.5 million ton. Over here, it is sold at a substantial discount of up to €180 (£129) a ton, in some cases at a lower price than the raw materials purchased by the European industry for producing biodiesel.

Such has been the impact that Elliott Mannis, chief executive of D1 Oils, one of Britain’s biggest biofuel producers, said that the European industry was operating at only 10 per cent of capacity, with many refineries mothballed and several companies close to administration.

One British company, Biofuels Corporation, has cited American subsidies as a key reason for delisting from AIM in July, owing Barclays about £90 million. This was despite, the month previously, Tony Blair having visited the company’s plant at Seal Sands in Middlesbrough to declare the government’s support for the industry (pictured).

One can only stand and gaze in awe at the monumental insanity of a scheme which uses taxpayers money to subsidise already subsidised imports, to such an extent that domestic production is damaged. There must be a name for the people responsible – how about biofools?