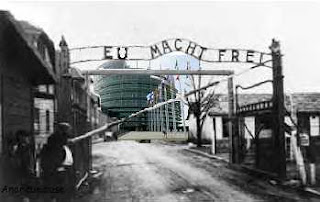 So, Hillary McCain won the states of Obama and Romney and is set to win the presidency race next year – or something like that.

Meanwhile, having already decided our presidency, without the expense and inconvenience of elections - and the attendant waste of time and energy - we Europeans, liberated from such anachronisms, have much more important things to deal with.

On the way to destroying our energy market and making sure that electricity is a luxury enjoyed only by the super-rich, the mighty EU has turned its attention to preventing cheap Chinese candles reaching our markets, in a bid to ensure that, when the lights go out, we are truly kept in the dark.

This, while the shallow facile Americans are frittering away their energies on elections and their wealth on fighting for democracy in far-flung places such as Iraq and Afghanistan, our brave Eurocrats are taking time out from not providing relief to Chad and preparing to referee a "fierce battle" between retailers and producers in the EU over who gets what candles.

According to The Financial Times, our ever-watchful trade commissioner Peter Mandelson is in the forefront of this endeavour, and is expected to recommend within days the pursuing of a complaint from candlemakers that a surge in Chinese imports is unfairly damaging their businesses.

An investigation by his diligent officials could lead to punitive tariffs on Chinese candle producers, but only if the majority of the 27 EU states does not object.

Candle retailers point out that only seven producers, representing a third of EU production, have complained and say their profits would suffer as they have nowhere else to source supplies. "You can only buy the quantity needed from China," said Alisdair Gray, of the British Retail Consortium in Brussels, representing UK shops. "We would be stuck."

Other voices can also be heard, grumbling about the Empire's more general failure to reform its trade regime. Jim Searles, a partner at Steptoe and Son (actually, Steptoe and Johnson) a law firm in Brussels, said the EU's credibility had been damaged by a failure to reform. "It missed a great opportunity," he said "The EU defence mechanisms will never fairly reflect balance of industry interests in the EU unless they are revised."

Heedless of these mutterings, the all-powerful European Candle Institute is continuing to storm the ramparts of the Berlaymont, complaining that the Chinese imports accounted for €280m of the €835m market in 2006 and made up more than 90 percent of all imports.

The institute says that "hundreds of jobs" have been lost in the past few months to the infernal Chinese producers who are actually selling their products cheaper than they can manage. Unsurprisingly, China's market share almost doubled to just under 40 per cent between 2001 and mid-2007. This is something, up with which the Institute will not put.

Thus, while the Americans continue with their obsession with this outmoded thing called democracy, it is good to know that, in the land of the freaks and the surveilled, it is business as usual as we attend to the really important things in life.

Admin note: Light blogging from me today - off to the "smoke".