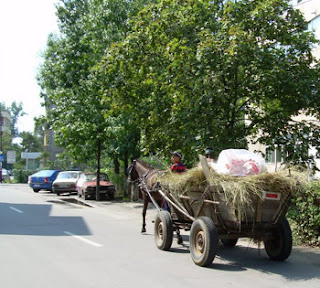 Actually, they starve them to death. This is from The Sunday Telegraph which tells us that they are dying after they have been abandoned by their Romanian owners - victims of a disastrous attempt to bring the country into line with European Union law by banning horse-drawn carts from main roads.

Whether it is in fact EU law, per se, is a little unclear as the article goes on to say that Romanian police are claiming that they are "under pressure from the EU to cut accident figures," and are blaming horse-drawn carts for 10 percent of the country's 8,400 serious road accidents last year.

It seems, therefore, that this is a home-grown impost, something that the BBC's Nick Thorpe reported on in November last year when he noted that there were still "an astonishing 750,000 carts registered in Romania as a whole."

Being the BBC, he could not possibly mention the "invisible hand" of the EU. Instead, he stated that, "A new law which bans them and their wagons from all main roads because they are blamed for 10 percent of all road traffic accidents in the country, is a cruel blow, aimed by the bureaucrats in Bucharest at the solar plexus of their own peasantry."

That The Sunday Telegraph is writing about EU involvement here points up the increasing grip exercised by the EU commission over road safety policy thoughout the member states, using a mixture of pursuasion, threats and law to get its way.

This is something we first noted in May 2004 when we reported that the EU wanted the British provincial government "voluntarily" to introduce random breath testing, threatening to produce a law if it did not comply.

At the time, the then home Office appeared to reject the blandishments, insisting that random tests were not an efficient way of catching drink-drivers, only to come up with a proposal for precisely that last December.

Significantly, while The Sunday Telegraph is happy to reveal EU involvement in Romanian affairs, its sister paper, The Daily Telegraph was somewhat coy about the EU's role in this proposal. Perhaps it feels it is alright for us to get worked up about its interference in other country's affairs, but that we must be protected from knowing how much the EU has infiltrated our own government.

There again, it could be that The Daily Telegraph journalist is not up to the job.