Visiting Google News, as one does, the eye lit upon a link to a BBC story (illustrated) headed "EU delays Chad peacekeeping force". This is no more or less than the truth but, for the BBC represents a rare moment of candour which reveals its beloved EU in a less than favourable light.

Obviously, such negativity cannot be tolerated within the portals of Broadcasting House so, clearly, a deft piece of re-writing has taken place.

On clicking though to read the BBC story, we find not the negativity advertised by Google but a completely different, more upbeat headline, telling us that, "EU plans resumption of Chad force" (illustrated). 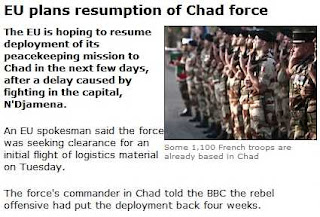 Thus does the BBC tell us that the EU "is hoping to resume deployment of its peacekeeping mission to Chad in the next few days, after a delay caused by fighting in the capital, N'Djamena."

So there it is – these brave EU soldiers are dressed up and ready to go, the only "delay" the BBC allowing us to know about is the short hiatus caused by those nasty rebels. Never mind that the "force" should have been in place since November.

Of course, what the BBC actually writes is neither wrong nor inaccurate. But the positive "spin" shines through on what is in fact a classic example of an EU failure and one which, as we know, has caused the "colleagues" no end of embarrassment.

Then, as we also know, money talks, and there is no way the BBC is going to bite the hand that feeds it.