Can't resist this one 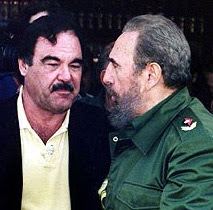 Every now and then there is a story around that is marginally related to the various themes we try to cover on this blog and this is one of them. It comes via that excellent conservative film blog Libertas.

There is a link to an interview with Oliver Stone on the subject of the now retired (if, indeed, he is alive) Cuban dictator and mass murderer Fidel Castro. Rather amusingly, Mr Stone compares Barack Obama to Castro, which is unlikely to be welcomed in Mr Obama’s camp. At least, I don’t think it would be welcomed but I cannot be sure. A comparison with Fidel Castro is unlikely to endear him to many voters when the real campaign will start.

What is of particular interest is Oliver Stone’s explanation as to why he admires Castro. No, for once there is nothing about the free health care (which was not good enough for the dictator himself) or the education system or suchlike trivialities.

No, no, Mr Stone admires Mr Castro for two reasons. One is because he is particularly drawn to the underdog and, secondly, because Castro “didn’t do it for the money”. As we know, for the likes of Mr Stone, who has never shown himself to be averse to earning mega-bucks for films of variable quality, to put at its most charitable, doing something for money is the ultimate sin. Well, if you are running a business that is.

But Castro, the man who established a bloody dictatorship, ruined Cuba’s economy (and no, it was not the American refusal to trade with the country), imprisoned, tortured and murdered anyone who disagreed with his rule, is an “underdog” and quite a good guy because he did not do it for the money.

Which, presumably means, that Hitler, Stalin, Mao, Pol Pot and many others are to be applauded as well. They did not do it for the money. Well, of course, their lives were much better than those of their unhappy countrymen and there are all those rumours about Castro being really quite a rich person, what with Forbes estimating his private fortune at $900 million as long ago as 2006 but I accept that his primary motivation was probably not money.

The pursuit of power and obsessive desire to impose ideology have resulted in far more deaths and suffering than doing something for the money, the latter being a healthy desire to better one’s life and expand business activity.
Posted by Helen at 18:59