So we can do business with the Kremlin? 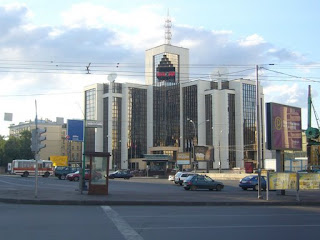 Undoubtedly the best book on matters political published so far this year is Edward Lucas’s "The New Cold War – How the Kremlin Menaces both Russia and the West". Just as soon as I finish reading it – it will not be long as the book reads like a thriller – it will be reviewed at length with comments and some disagreements.

In the meantime, I came across an interesting piece of news that supports Mr Lucas's main thesis (one with which I fully agree with, as readers of this blog know) that Russia is using its energy resources to wield influence both on and in Western Europe. Those energy companies, incidentally, are owned by the state and run by friends of President (soon to be Prime Minister and Chairman of Gazprom) Putin.

Among other matters, Mr Lucas excoriates Western companies that cannot see beyond the profits they are making. One can, of course, argue that it is not the job of business to see beyond profits and human rights have little to do with them. I think I would be more inclined to accept this argument if I did not have to put up with endless boasts about how environmentally friendly all these companies were.

Not only are the murder of journalists and business leaders and the imprisonment of inconvenient and outspoken individuals as important as environmental matters but it is also true that green issues come very low in the list of Kremlin's priorities. Guess what happens to those who try to uncover and write about various environmental problems and, even, disasters? Yes, that's right, trumped up charges and prison or, more recently, lunatic asylum.

Perhaps, businesses do not need to concern themselves with the fact that Russia is using its energy to bully the smaller Baltic and East European states, threatening to by-pass them in future deliveries. Should countries not ask themselves, though, about the efficacy of salami tactics (first defined by the Mátyás Rákosi’s Communist government of Hungary)?

Over and above that, I find it hard to understand why Western firms should want to deal within a system that does not acknowledge contracts as Shell and BP found out last year to their immense cost. Are the shareholders ever going to say anything about that?

This item is not about Gazprom but Lukoil [whose Moscow headquarters are pictured above] which has yet again halted oil supplies to Germany through its Druzhba pipeline. (Druzhba means friendship in Russian, which adds a little to the piquancy of the situation.)

On February 18, 2008, a Lukoil representative announced that the company was again stopping oil supplies by pipeline to Germany because "we do not agree with the price." Lukoil argues that it is not in breach of contract, citing the absence of long-term contracts with its customers in Germany. The Russian company is prepared to resume deliveries in March in the pre-planned volume, but apparently at a higher price.

An interesting way of doing business and one that the German companies find somewhat irksome. According to Reuters this has contributed to market edginess and the rise in oil prices.

What of those German companies who are being kept on edge by not knowing when Lukoil might decide that it is not contractually bound to supply crude oil at the price supposedly agreed in the quantity supposedly agreed?

Initial reactions from these refineries and their shareholders seem remarkably subdued. All four majors are increasingly dependent on "access" to Russian oil and gas on Russian-defined terms (ENI in South Stream, Total in Shtokman) or Russian-dictated conditions (Shell in Sakhalin-2, BP at Kovykta).

Shell recently went so far as to offer its stake in Germany's largest refinery, the Karlsruhe-based MIRO, to Rosneft in a possible deal for "access" to Russian hydrocarbon deposits. Shell and BP/Ruhr Oel, partners in Schwedt and Leuna, also hold stakes of 32.5 and 24 percent, respectively, in MIRO (see EDM [Eurasia Daily Monitor], September 18, 2007).

The Schwedt and Leuna refineries can maintain full-scale operations in the short term from existing feedstocks. But they would run low on feedstock by early March, unless Lukoil quickly resumes full-volume supplies at the higher price it seeks. The companies are again scrambling - as they had to do last August - to arrange deliveries by sea tankers through the German Baltic port of Rostock, from which pipeline links are available to Schwedt and Leuna.

It seems Mr Lucas is right in one respect: short-term greed allows Russia’s leaders whether in politics or "business", which is largely interchangeable, to flout all rules and to bully all who get in their way.

As Vladimir Socor points out in his piece on Eurasia Daily Monitor:

Apart from the price issue, a host of obscure reasons are being cited as possible explanations for Lukoil’s supply stoppage. One possible reason is Lukoil's chronic dispute with the oil trader Sunimex, headed by Russian businessman Sergei Kishilov. This company acts as general importer (coordinator in Russian parlance) of oil from various Russian producer companies to Germany and several Central European countries. Lukoil has long tried to squeeze Sunimex out of this business, most recently through the August 2007 delivery shortfall.

Transneft president Nikolai Tokarev publicly supports Lukoil’s goal to eliminate Sunimex from these transactions (Vedomosti, February 18; Reuters, February 19). For their part, importers of Russian oil in Germany prefer to deal with a single intermediary such as Sunimex, rather than having to deal individually with various Russian producer companies.Lukoil's move may also stem from the Russian government’s policy to redirect part of the oil flow away from the Druzhba pipeline and into the Baltic Pipeline System (BPS) which is being expanded. The goal is to maximize oil export by tankers through the Baltic Sea, correspondingly reducing the overland transit through Druzhba pipelines via Belarus, Poland, and Ukraine.

Lukoil may well also be seeking to intimidate German refineries' owners into ceding share packages to it as a "guarantee" of stable supplies in the future. Similarly, the Russian state itself may be trying to signal that supplies have become too tight to suffice for all customers and only the favored ones can count on steady supplies from now on. For the most part these explanations are not mutually exclusive. But perhaps the most relevant fact remains that German refiners and commentators alike are again, as last August, reduced to guessing.

Hmmm, I wonder how long it is before we find out that Sergei Kishilov and Sunimex have been in default of some tax or another.

Long-term matters may be different. Very soon there will be problems with the production and delivery of both oil and, especially, gas from Russia and those pipelines that Gazprom has a major stake in, have not been built. Furthermore, unlike many other economies that rely on raw energy for income, Russia is a huge consumer of it. This, too, will complicate matters in the future.

What will happen to those countries in Western Europe that place all their reliance on Russian energy supplies?
Posted by Helen at 16:27