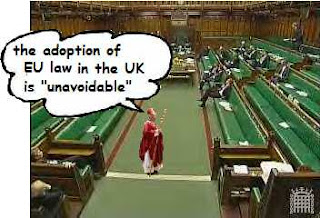 What could be best described as a "wry smile" – others might have called it a grimace – passed briefly over the visage of this blogger this morning on seeing the strap line on the front page of The Sunday Telegraph.

"Migrants must obey British laws", the strap proclaimed. "I wish!", was my response, having written some time ago that the egregious failure of the immigrant communities to obey the law of the land was possibly of significant factor in their inability to integrate.

But there is a double irony here in that many of us would like the opportunity to obey British laws. In our current system, they are becoming rare as the legislative power in this land is increasingly assumed by the European Union.

It was rather apt, therefore, that Richard Shephard MP, in a debate on the EU constitutional Lisbon treaty on Wednesday (to a near empty House) should have remarked that, "this great parliamentary Chamber has collective amnesia as regards remembering to whom we are accountable and who should form our laws." 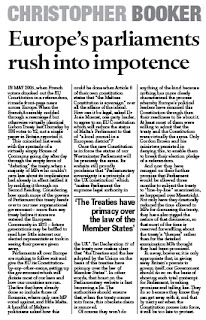 Enter Christopher Booker with his column this morning, remarking on "Europe's parliaments rush into impotence". Like us, he noted the contrast between May 2005, when French voters chucked out the EU Constitution in a referendum and last Thursday, when the French Assembly nodded through a rearranged but otherwise virtually identical Lisbon Treaty.

In the former instance, the event made front-page news across Europe yet, last Thursday, not a single British newspaper recorded the French ratification.

This coincided last week, writes Booker, with the spectacle of a virtually empty House of Commons going day after day through the empty farce of "debating" the treaty, when a majority of MPs who couldn't care less about its implications had already, in effect, ratified it by nodding it through on Second Reading. He adds:

Considering how much more of the powers of Parliament this treaty hands over to our new supranational government - more than any treaty since we entered the European Community in 1973 - future generations may be baffled to read how little interest our elected representatives took in seeing their powers given away.

Parliaments all over Europe are rushing to follow suit and give the EU its Constitution-by-any-other-name, setting up the government that will dictate most of our laws and how our countries are run. The five that have already done so include those of Romania, where only one MP voted against, and little Malta.

Booker then picks up on a "handful of Maltese politicians" who asked how this could be done when Article 6 of their own constitution states that "the Maltese Constitution is sovereign" over all the affairs of the island. How can it be legal, asked Dr Josie Muscat, one party leader, to agree to an EU Constitution that will reduce the status of Malta's Parliament to that of "a local council in a European district"? He continues:

Once the new Constitution is in force, the status of our Westminster Parliament will be precisely the same. Its website still proudly proclaims that "Parliamentary sovereignty is a principle of the UK constitution" which "makes Parliament the supreme legal authority in the UK".

Yet Declaration 17 of the treaty now makes clear that "the Treaties and the law adopted by the Union on the basis of the treaties have primacy over the law of Member States". In other words, that boast on the Parliamentary website is fast becoming a lie. The authorities should ensure that, when the treaty comes into force, this obsolete claim is removed.

Of course they won't do anything of the kind because nothing has more clearly characterised the process whereby Europe's political leaders have rammed this Constitution through than their readiness to lie about it. At least most of them were willing to admit that the treaty and the Constitution were virtually the same.

Only Gordon Brown and his ministers persisted in denying this, to enable them to break their election pledge of a referendum. And now they have reneged on their further promise that Parliament would be allowed three months to subject the treaty to "line-by-line" examination, as happened over Maastricht.

Not only have they drastically reduced the time allowed to MPs for discussing the treaty, they have also rigged the nature of that discussion, so that most of the time is reserved for waffling about the treaty's "themes" rather than for the detailed examination MPs thought they had been promised.

In a way, however, it is only appropriate that, in giving away Britain's powers to govern itself, our Government should do so on the basis of showing such total contempt for Parliament, breaking promises and telling lies. They do so because they know they can get away with it, and that by next year when the Constitution comes into force, it will be too late to protest.

Not entirely unrelated, Vicki Woods in yesterday’s Telegraph writes of thrill of the American electoral race, contrasting the difference between the democratic process which selects the US president and the back-door process by which a "president of Europe" will be selected.

Sure enough, in today's newspapers, there is copious coverage of the US presidential race and – barring the Booker column – none at all of the parliamentary ratification of the constitutional Lisbon treaty. Whether they like it not, successive generations of MPs have, through their "collective amnesia", consigned themselves to irrelevance. It is no wonder that all the media is interested in is the expenses they claim, while the chattering classes indulge in the vicarious thrills of the US election.