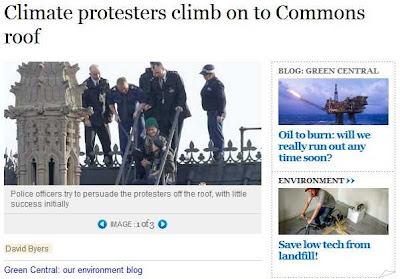 Perhaps the polite, well behaved EU referendum lobbyists should have spurned their well-ordered queues, ignored their MPs and climbed to the roof of the parliament and unfurled their banners demanding a referendum.

In terms of publicity, they would have gained a great deal more. For a brief period, the "climate change protesters" graced the lead positions on all the national newspaper websites, complete with photographs. Yet you would be hard put to find a single media photograph of the referendum lobby, much less a report of anything like the length given the roof-top demonstrators.

However, to make such comparisons only on the basis of publicity gained would be wrong. After all, the hunt supporters were equally given to high profile demonstrations in parliament but, in the end, they lost their battle to prevent the banning law going through (although whether they have lost their war is a moot point). 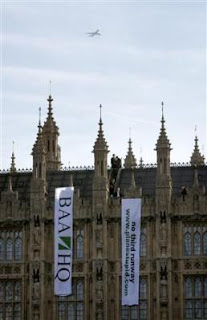 But the "grab" from The Times website gives you more than just the news of this incident. Note the reference to the environmental blog, "green central" and the other links to green issues. Does The Times run a blog on EU issues? Don't bother looking – the answer is no.

This is but one indication of how much the "climate" issue has dominated politics and media, and provides a stark contrast to how little time and energy is afforded to EU politics – much less the cause of Euroscepticism.

For sure, rampant environmentalism is a global movement, so comparisons have to be made with caution, but nevertheless some can be made. In fact, there are more parallels than might be thought, not least in the timing and the length of the campaigns.

One obvious parallel is that much of the modern environmental movement stems from the early '70s – much the same time as euroscepticism became a movement, with the 1975 referendum. But, while environmentalism has forged ahead, euroscepticism remains in the doldums, a small minority of hard core activists who are going nowhere.

To carry out a detailed analysis of why one movement has been so wildly successful, while the other has failed, is beyond the scope on this one posting – although we may return to the issue. It is fair to say though that the one thing that environmentalism does have in common with other successful political movements is that it won the "intellectual" argument. "Green" arguments are now the perceived, unchallenged wisdom of the age, whereas climate sceptics are treated with the same scorn and derision as are the eurosceptics. 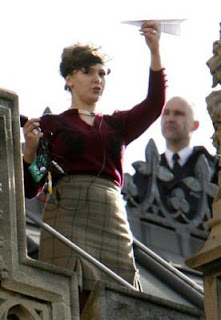 However, there are also lessons here. Gradually, or so it seems to us, climate scepticism is making inroads into the orthodoxy. The way it is so doing is not by organising mass lobbies of parliament, or by recruiting teams to thrust leaflets through the doors of uncaring householders, but by fighting (and winning) the intellectual arguments.

Here, the internet is proving to be a powerful weapon. An increasing number of disaffected climate scientists and informed observers – denied a hearing in the media – are turning to the blogosphere to make their case. Their output is not written in capitals, with lurid headlines in red lettering, denouncing world conspiracies. Instead, it employs cold, hard science and reason. And, as we averred, these bloggers are beginning to have an impact.

Furthermore, how many self-proclaimed eurosceptics are computer-literate and are actively writing on the internet, pursuing the debate, fighting the intellectual war, building a rock-solid core of date which can fuel the movement? There are some, for sure, but I suspect only a fraction of those who could be involved.

Moreover, when the Lisbon treaty is done and dusted, safely in the bag having been ratified by the 27 member states, how many so-called activists, who came in for the ride while a treaty was being forged, are going to move on to other things, instead of gearing up for the long haul?

How many of us are prepared to build an intellectual case, over the decades that are needed to change public sentiment, rather than just repeating the same, tried old mantras that would be just as familiar to the campaigners of '75 as they are to us over thirty years later? 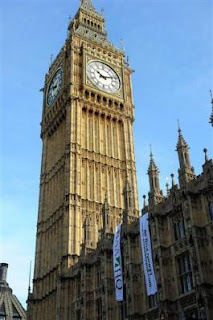 What we need then, is focus. A comment was expressed on our forum about "warriors" who were only prepared to fight when they were certain of winning, but – if I remember correctly – the great genius of Field Marshall Montgomery, is that he refused to commit his troops to battle until he was certain of winning. Before that, a great deal of intellectual effort went into making that so.

One thing we could do to prepare for the next round – we did it before on other matters – is to get a group of MPs and their Lordships to set up their own, properly structured inquiry on the implications of leaving the EU. Conducted in exactly the same manner as a select committee, it could call evidence from all comers and produce, by way of a report, a vade mecum for the those who are prepared to continue the battle.

Properly done, it could make the case for leaving, point out the pitfalls, and tell us what we need to do to make a successful transition from a vassal state in the thrall of an over-arching supranational government, to a free, independent state once more in control of our own national destiny. Crucially, though, it could also point to what sort of nation that would emerge, and the benefits of striving for freedom.

Failing that, we can all go back to stuffing leaflets through doors and, in ten years or so, when the next EU treaty is ratified, we can all indulge in yet another round of recriminations and heart-searching as to why we failed once more.