The shame of Iran 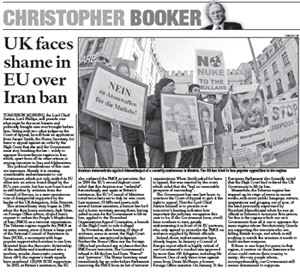 Booker today in his column returns to the theme of Iran. He reports that, tomorrow morning, the Lord Chief Justice, Lord Phillips, will preside over what must be the most bizarre and politically fraught case ever brought before him.

Sitting with two other judges as the Court of Appeal, he will hear an application from Jacqui Smith, the Home Secretary, for leave to appeal against an order by the High Court that she and the Government must stop breaking the law - solely to appease the murderous regime in Iran which, apart from all its other crimes, is arming terrorists in Iraq and Afghanistan.

"The political ramifications of this case," writes Booker, are immense, and he goes into chapter and verse in his column, which is well worth the read. But what is utterly baffling is that a case which is deemed so important that the Lord Chief Justice himself is presiding, gets no other mention in the MSM. 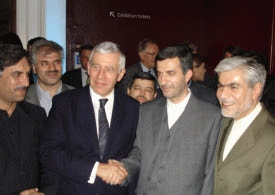 Booker has been the only British journalist who has been consistently following this issues, which is one of the most shameful episodes of New Labour foreign policy that it is possible to imagine – an act of appeasement that began in 2001 when the then home secretary, Jack Straw, on Foreign Office advice, obeyed Iran's request to outlaw the People's Mujahideen of Iran (PMOI) as a terrorist organisation.

Already it is causing considerable embarrassment to our government, Booker tells us, which not only misled its EU allies into an action found illegal by the EU's own courts, but has now been boxed in still further by criticism from the Council of Europe, in a near-unanimous vote of disapproval supported by the leader of the UK delegation, John Prescott.

We have often voiced criticism of the MSM for its slavish adherence to trivia and its complete inability to discern what is important. No more so than in this ghastly episode is that criticism so well deserved.