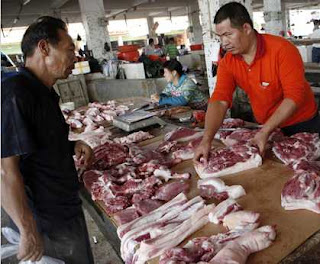 Tucked away in The Daily Telegraph business section today is a small item which deserves much greater attention (which it gets in The Times).

Last November, incidentally, the NewYork Times was telling us that inflation in China had risen 6.5 percent that October a year earlier, accelerating from 6.2 percent in the September, matching an increase of 6.5 percent in August. This, the paper said, was "China's highest inflation rate in nearly 11 years."

Howsoever, the main point is that headline inflation is rising quickly in China – almost as much as ours, if the government told the truth about the RPI - The Telegraph reporting that this suggests decisions to hike interest rates and allow the currency, the yuan, to rise faster against the dollar have failed to curb an economic indicator the government regards as crucial to social stability. Moreover, food costs have risen 18.2 percent, with pork prices as much as 58 percent up - much of this attributable to the recent poor weather.

Producer prices are also up 6.1 percent in January, pointing to underlying inflation which leads most analysts to believe the price hikes will continue into the spring. Many, though, expect it to get worse, with The Guardian articulating a common concern that the surge will push up world inflation.

Interestingly, the Wall Street Journal begs to differ, arguing that the effect of inflation in China is diluted by the relatively low proportion of imports to overall GDP. As far as the US is concerned, a one percentage point increase in China's inflation rate should lead to an increase in U.S. inflation of 0.02 to 0.03 percentage points. In fact, historical price trends tend to show an even slighter effect.

However, this is a somewhat one-dimensional view in that China is also competing for basic commodities and we saw recently the effect that was having on the coal market, driving global inflationary pressures. 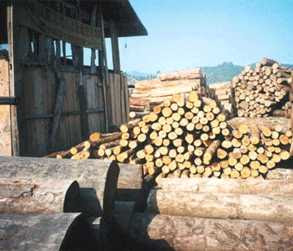 Even more recently, we learn that the winter storms have had a devastating effect on China's forestry sector. The industry has suffered $8 billion in losses, with the snows and frosts having damaged 20.86 million hectares of forests, or 10 percent of the total commercial forestry in China.

Already a major importer of timber, with several factors pointing to sustained growth China’s purchases in 2002 totalled 16 million cubic meters, some 16 times more than the figure for 1997.

The growth has continued in recent times, surging during 2006 and, while the current picture is confused, there can be little doubt that timber is another commodity where price rises can be expected due to Chinese intervention, further adding to inflationary pressure both internally within China and at a global level.

What is doubly interesting is that, while the world gaze in on Pakistan, Kosovo and Cuba, the concern in China and the Far East is dominated by the forthcoming referendum in Taiwan on UN membership.

This is seen as a move toward formal independence for the self-ruled island and is attracting bellicose noises from the Chinese government, with veiled threats of military intervention if the referendum goes through.

Although that may be unlikely, the possibility of China taking some form of economic action – and even retaliating against the US, for its support of Taiwan. The latter could involve China liquidating its dollar stocks and moving big-time into the euro, destabilising the US economy, with unknown but potentially serious effects. The worst-case scenario is that this could catalyse a global currency crisis.

Quite where it puts the UK – and the rest of the EU – is anyone's guess but, aside from our preoccupations with Northern Rock and other parochial issues, it is fair to say that there are storm clouds gathering on the not-too-distant horizon which could make all our current troubles seem like paradise.