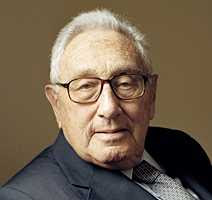 Speigel interviews Henry Kissinger. His is reminded, "Thirty years ago, you asked for one phone number that could be used to call Europe." Kissinger says:

... and it happened. The problem now is: Nation-states have not just given up part of their sovereignty to the European Union but also part of their vision for their own future. Their future is now tied to the European Union, and the EU has not yet achieved a vision and loyalty comparable to the nation-state. So, there is a vacuum between Europe's past and Europe's future.

That is an extraordinarily perceptive observation. The EU has managed the first phase of its project, undermining the nation states, to the point where they are effectively emasculated. But, despite its best efforts, it has not managed fully to replace them. We are in a half-way house – neither a group of independent states nor fully integrated into whatever system the "colleagues" have in mind.

This is why, of course, the EU must come back for another treaty after this one – and another, and another, until the project is complete.