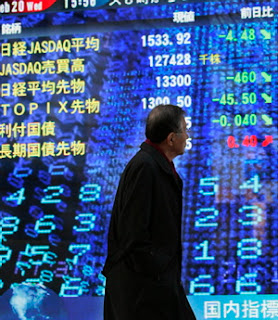 We are not privy to arcane details such as the salary paid to the Bank of England deputy governor Rachel Lomax, but it is unlikely to be a modest amount. However, whether or not it is good value, we can faithfully assure readers that they could have got her latest pronouncement free of charge from this blog – and a lot earlier.

According to The Daily Telegraph (business section, of course), the deputy governor is telling us that the "UK faces 'real risk of high inflation'", this from somebody, presumably, with her finger on the (financial) pulse of the nation.

But hey! What were we writing on 13 February?

And, guess what! The lady deputy governor is warning that, "Britain faces a real risk of high inflation caused by 'a remarkable period of soaring commodity prices' resulting in slower demand". You don't say … you really don't say!

The Telegraph then goes on to say that, "Her cautionary message came as retailers reported an unexpected fall in sales in February and prices rising at their fastest rate in more than a decade."

Unexpected? What planet do these people live on? That retail sales did not fall off in January is not surprising – the stores were dumping unwanted stock at give-away prices (and thus very low margins) and the temptation to buy was too great for some.

But, if reality has yet to penetrate the skulls of the political classes and the journos – real people are now feeling the pinch, being forced to cut back in all sorts of different ways. Thus can Ms Lomax say that the outlook for the UK economy has "changed dramatically" since the credit crunch took hold and that the extent of the impact on the UK was "highly uncertain".

Of course, she dresses it all up in jargon – and that is probably what she is really paid for. She says that the Monetary Policy Committee's central judgment is "that the financial stress will act as a significant drag on demand over the next two years. But there is a high level of uncertainty about this and... the risks, as they affect output, are tilted to the downside."

The lady adds that the rise in commodity prices, such as energy and food costs, had not yet fully fed through into consumer prices and from next month CPI inflation was likely to rise more sharply.

Anyone wanting to know why needs only to look at this blog (try this piece last September) but they can also get an update from the main news section of The Telegraph which tells us that the price of a loaf of bread is set to increase to £1.30.

The proximate cause is, of course, wheat prices on the global wheat market, which "spiralled ever higher this week". Says the paper, "prices in the UK could climb even higher after the global market entered a new phase of turbulence, after Kazakhstan - a leading grower of high-quality wheat - imposed export restrictions."

Also, we are told, "The spiralling cost of wheat has been exacerbated by the increasing number of farmers, especially in the United States, who have stopped growing the cereal in favour of growing maize for the bio-fuel industry." This, to no one's surprise (except political journalists), "has led to a fall in supply with US wheat inventories expected to fall to their lowest level for 60 years."

The trouble is that it is not only direct commodity costs that are increasing. We also learn that water bills rise by double inflation rate. Thus, what applies to ordinary people – who are having to tighten their belts – does not apply elsewhere. But then the water utilities are having to find the money to satisfy the increasing regulatory imposts from Brussels and as long as they have local monopolies, they are free to jack up their prices regardless.

The worst of this all is that, as we wrote recently, this is not impacting as a mainstream political issue. This, though, should not be surprising. In days of yore, when runaway inflation was previously an issue, our local government in London still had some vestiges of control and authority. Now, with its power drained away, there is no point in David Cameron raising the price of bread at PMQs and asking what the government intends to do about it.

Nor is there any point in the MPs at Westminster debating it. There is nothing they can do, so the only effect of any debate would be simply to underline their powerlessness. Best, therefore, to ignore the issue altogether and prattle on about any subject under the sun, except the rock-bottom concerns of the people, hit where it really hurts.

In today's Telegraph, Simon Heffer delivers another of his delicious rants, railing about his favourite subject – corrupt and venal politicians. We wonder though, if he reads our blog, because he concludes that, if politicians have contempt for us, that contempt is mutual. That is precisely the phrasing we used last Friday.

Yet, if we have contempt for them now, as the inflation crisis gathers pace – and more people discover just how powerless the government and MPs have really become - contempt will be the least of it. Once people start really hurting, the ball-game changes.