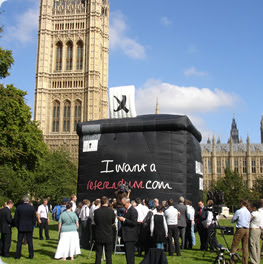 The BBC is reporting (with some glee) an extraordinary confrontation between Derek Scott, chairman of I want a referendum and Andrew Slaughter, the Labour MP for Ealing, Acton and Shepherds Bush.

With a majority of 5,520 at the last election, Slaughter's constituency has been targeted by the I want a referendum campaign for a mini-referendum on the Lisbon treaty, and was interviewed with Scott for Today in Parliament on BBC Radio 4, to be broadcast at 11.30 this evening.

According to Scott, as retailed by the Daily Telegraph website, Slaughter arrived "obviously very wound up and arrived at the studio in a rage" and accused Scott of fronting a "dishonest" marketing exercise for the Conservative Party.

On the one hand, Scott - a Labour supporting former adviser to Tony Blair - insisted that his campaign had support from across the political spectrum. Slaughter, on the other, said that rather than being genuine exercises in democracy, the mini-referendums were simply aimed at unseating Labour MPs at the next general election, and demanded that Scott revealed the source of his funding.

The Labour MP then alleged that IWAR was "a dishonest exercise from start to finish". He added, "It's masquerading as something else. It's a marketing exercise for the Conservative Party and its candidates and Mr Scott should be honest enough to admit that."

Certainly, the links between IWAR and Open Europe are well known, the one effectively being a "front" for the other.

And, despite Open Europe's claim to being "an independent think-tank contributing bold new thinking to the debate about the direction of the EU", its links to the Conservative Party are also well known. So close are the two organisations that Open Europe is privately regarded as an adjunct to CCHQ and as the research department on the EU for William Hague's office.

Other suspicions are that Open Europe - although having provided some excellent analyses on the Lisbon treaty - is "pulling its punches" on the EU, keeping the debate within "safe" areas which will not embarrass the Conservative Party. Thus, it has shown no enthusiasm for "broad church" Euroscepticism and has shunned campaigning groups such as UKIP, which take a more robust view of the treaty.

Slaughter may, therefore, have something of a point in his charges, but one wonders quite what motivated his apparent fury. The general expectation is that the IWAR mini-referendums will founder on a low turnout, demonstrating weakness rather than strength, in which case he has little to worry about.

But, with the Labour government itself so obviously rigging the debate on the Lisbon treaty, perhaps IWAR has touched a raw nerve.