Not with a bang, but a whimper 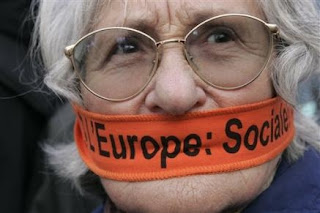 What a difference from the heady days of May 2005 when we thought the game was over. Yesterday, the French assembly rolled over and approved the Lisbon treaty, 336 votes to 52.

The vote of the Senate is seen as a formality so Sarkozy will soon be clear to sign the ratification instrument. That will make France the fifth, after Hungary, Romania, Slovenia and Malta

"All of Europe is waiting for this signal from France," Foreign Minister Bernard Kouchner said before the vote, leaving only the Communist and other far-left groups to against ratification. The opposition Socialists, who were split in the 2005 vote, were divided again: 121 supported ratification, but 25 voted against and 59 abstained.

And so the march of integration continues.