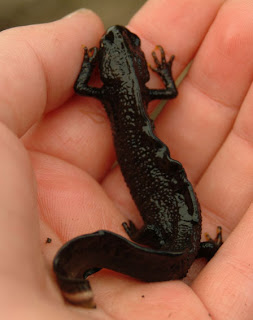 It is covered by The Times, The Telegraph and, oddly enough, by the BBC. This is the story of how Cheshire Council have had to pay £60,000 to move four newts from the path of construction site after it was found that a tiny colony of great crested newts, which proliferate throughout Cheshire, were standing in the way of new classrooms and an IT block at Fallibroome High School in Macclesfield.

The legislation in question, which led directly to the expenditure, was the Habitats Directive, which defines the Great Crested Newt (Triturus cristatus) as an endangered species, triggering the expensive protection measures of which Cheshire Council fell foul.

However, there is some question as to quite how "endangered" this species might be in the UK, as there are estimated to be 400,000 great crested newts in the country in 18,000 breeding sites. This is not the case in the rest of Europe, where the species is faring less well but, since we are all part of the Great European Venture, what is good for Europe has to apply to us all.

Barrie Harden, a former council chairman in Cheshire, makes the obvious point, saying: "Around £15,000 per newt seems a ludicrous sum of money. They are a legally protected species under EU regulations … I am very concerned about taxpayers' money being used in this way in what appears to be a ridiculous situation."

What is really chilling though is a comment on the Times website, with "Alli" from Stockton-on-Tees, England, writing:

So the council believes the life of a protected amphibian is not important enough to pay for it's (sic) safe re-homing? Councils have to understand the importance of indigenous species habitats and must abide by the rules of protection however much it costs. If they don't like the cost, they should consider looking for another site for their projects. Preferable in my opinion.

This is a nation writing its own suicide note for, while the problem has been resolved here – albeit at ridiculous expense - in a much less publicised case, the finding of these newts is holding back plans to develop opencast mining in a 170 acre site near Consett, County Durham, with a potential yield of over half a million tons of coal.

Given the emerging energy crisis and the massive price hike in coal, one would have thought that the fate of a colony of these rather unattractive creatures would be of less concern than the very real need to keep the generators turning. But, such is the distortive effect of the Habitats Directive that planning officers are recommending the rejection of the application. A planning officer's report, setting out the grounds for refusal, states that:

There is likely to be significant impact upon the Brooms Pond and Great Crested Newt species… In addition to great crested newts, other species have been identified both on site and in the local area that could be affected during the operations. These include bats, badgers and birds. The loss of the Brooms Pond and harm to the Great Crested Newt population cannot be offset by the creation of new habitats taking into account the difficulty with translocation.

A delighted local campaigner, fighting the application, says, "The great crested newts are a show-stopper, and a recent survey found 47 in the pond…". UK Coal, however, are saying that, "Great crested newts are not an impediment. They are a protected species, but we can and we will create safe new habitats for them."

However, if the go-ahead is given, the costs are likely to be substantial. The Cheshire incident is by no means unique nor the most egregious. Last year, reported locally by the BBC, Anwyl Construction, based in Rhyl, Denbighshire were forced to spend £140,000 on a special new habitat for newts - then discovered there were only two on site where 26 new homes were being built. The project was also delayed for six months. Company director Matt Anwyl joked: "We could have built them a three-bedroomed house instead".

Nor even was this a first for the company. It also had to spend £300,000 at Aberkinsey Parc in Rhyl. There, a much bigger colony of newts had been discovered close to a site where 320 homes and a school were being built.

Even the mighty 2012 Olympic games are not spared from the onslaught of the single European newt. In Redbridge, £70,000 is having to be spent on relocating a colony to make way for a temporary cycle circuit. At an estimated £450 per newt, however, this is relatively good value – by EU standards.

This, though, pales into insignificance compared with another developement in Cheshire when, in November 2006, the Highways Agency were forced to spend £300,000 to relocate a colony of newts near a £51m road project. The newts had to be moved to make way for work on the Deeside Park junction of the A5117 in Cheshire. Officials refused to confirm reports that the cost worked out at £15-20,000 per newt.

Nevertheless, the great granddaddy of them all was the great newt hunt around Orton brick pits, near Peterborough in 1996. There, a new town of 5,200 homes required the relocation of 15,000 newts, which cost around £1,000 a newt by the time the cost of sacrificing 300 acres of land for a dedicated newt reserve was taken into account.

The operation itself cost £3 million according to some reports but the ultimate irony was that none survived the move. Nor even was it certain they would have survived in the existing habitat, as fish, the newts' main predator, had entered the ponds in the brick pits, threatening to wipe them out.

Undoubtedly, the developers (or the people who bought the houses and thus had to pay the costs) would have thought the money well spent - no expense should be spared to save the single European newt. Let us hope they do. The farming and rural consultancy ADAS estimates that, if you take in species such as bats, lizards as well as the newts, the annual cost to UK developers is a staggering £15 million.