The snows of Kilimanjaro 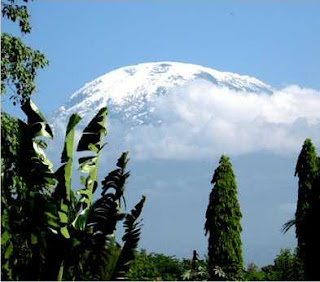 Hilariously – if your sense of humour takes you that way – EU environment commissioner Stavros Dimas has flown off to the United States today, thereby enlarging his carbon footprint considerably, all in an attempt to get the US to, er… reduce its carbon footprint.

Meanwhile, in the wake of Booker – who did it last Sunday - Noel Sheppard of Newsbusters noted that the media was showing a certain reluctance to acknowledge the fact that something rather odd has been happening to the weather this winter.

With a piece headed, "Will Media Ignore Harsh Winter of 2008 to Preserve Global Warming Myth?", Sheppard did note, however, that the Canadian National Post had done a piece on the winter freeze, that one headed, "Forget global warming: Welcome to the new Ice Age".

What struck Lorne Gunter, the National Post correspondent, most forcibly was that snow had returned to the peak of Mount Kilimanjaro – the absence of which in recent times has been another of those iconic symbols that has been exploited by the warmists – second only to their drowning (not) polar bears.

Sheppard himself has great fun with Arctic Sea ice. Remember: "The ice, we were told so hysterically last fall had melted to its 'lowest levels on record?'" he asks us. Well, Gilles Langis, a senior forecaster with the Canadian Ice Service in Ottawa, says the Arctic winter has been so severe the ice has not only recovered, it is actually 4-8 inches thicker in many places than at this time last year.

What is going to be even greater fun though is, with the ice being that much more extensive this winter, and much thicker, the melt back in the summer is going to be less – frustrating the warmists predictions that it was all going to disappear in seven years.

Without any great fanfare, we must also record a piece in last week's Sunday Times which announced that David Cameron is rowing back on his green dogma. It seems that voters are none to happy at the prospect of green taxes and other greenie imposts, and are less than impressed with his windmill on the roof adventure. Nonetheless, it seems the Tories are still locked into "tough new targets", cutting green emissions by 80 percent by 2050.


As a happy antidote, the demise of the great Danish windmill has given rise to great hilarity – video above if you are one of the few who has not seen it – a vision which will, I suspect, become as iconic to the global warming sceptics as was a snow-free Mount Kilimanjaro to the warmists.

Where that leaves poor Mr Dimas, though, is anybody's guess. But, at least, it seems to have stopped snowing in Washington DC.