The only leader worth voting for 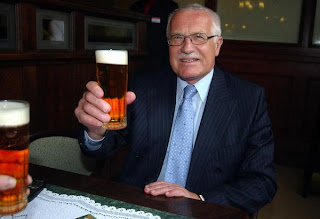 After a good deal of trouble, Vaclav Klaus has been re-elected by the Czech Parliament to be that country’s President. There was a great deal of passion involved, especially in the first round. Even in the “relatively calm” atmosphere of the third round, which resulted in 141 votes for Klaus, one more than needed, there were problems.

The Communist candidate, Jana Bobošíková, who is a member of the Toy Parliament in Brussels/Strasbourg, dropped out, realizing that she was going to get nowhere. Professor Jan Švejnar of the University of Michigan, received 111 votes, mainly from the Social-Democrats and the Greens. He is an economist and with that kind of support one can make a very good guess as to what kind of economics he professes.

One Social-Democrat MP supported Klaus, incurring displeasure from the party and one Green MP did not turn up for the crucial vote, allegedly, for reasons of health, though, it would appear, she was not at home when her colleagues tried to find her. Maybe she just was not answering any bells.

This is a good reason for rejoicing as Vaclav Klaus is the only senior politician in Europe (and that includes Britain) who actually believes in a free economy and strongly dislikes the European Union, particularly the Constitutional Reform Lisbon Treaty.

As he said in a speech at the University of Chicago:

To fight for peace - when war does not threaten - is, however, a wrong excuse for building institutions which tend to restrain freedom, democracy and democratic accountability, not to speak about economic efficiency.

He has also expressed a great deal of scepticism about man-made-global-warming.

The EU is not really worried. After all, Klaus is something of a voice in the wilderness and, in any case, how much damage can a small East European country, to some extent a client state, do?

EU leaders have been falling over themselves in their joy. Klaus has been welcomed by many, especially the ex-Maoist Commission President Barroso (yes, I know one should not hold youthful follies against middle-aged politicians but I am not convinced El Presidente has moved all that far from those follies), said that he was sure President Klaus will protect European values as he has promised.

I am not quite sure what Commission President Barroso means by “European values” but I suspect that his definitions are different from ours or from Vaclav Klaus’s. What, I assume, he is talking about is not too much boat-rocking as far as the EU is concerned, which is little to do with European values.

After all, it is a little difficult to argue that such institutions as the Commission or the Toy Parliament are part of those nebulous European values. Well, no more than the Inquisition or slave labour camps were.

EurActiv, while dutifully reporting the joy expressed by Commission President Barroso over President Klaus’s re-election and the EPP-ED’s tight-lipped joy at having the man who piloted the Czech Republic’s application to the EU in the nineties, shows itself to be somewhat more sceptical (if I may use that word) about Klaus’s europhiliac credentials. As well they might.

Klaus has frequently opposed giving up competencies to the EU, which he sees as too "centralised". He had been a vociferous opponent of the EU's doomed constitutional treaty and has likewise adopted a hard line during talks on its successor, the Treaty of Lisbon (EurActiv 18/04/07). Klaus also made headlines for stating that global warming is a "myth" at a time when the EU is making the fight against climate change its top political priority.

The Czech Republic is due to take over the presidency of the EU in January 2009 immediately after the French stint.
Posted by Helen at 15:59