You can look but you can't fly 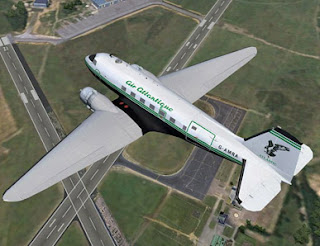 A welcome fixture at most airshows these days is a vintage DC-3 Dakota, operated by the Coventry historic aircraft company Air Atlantique. For years, it has offered ordinary people – at a modest cost – the unique opportunity to fly in one of the greatest aircraft of last Century.

In its guise as the RAF's Dakota, it conveyed paratroops to Normandy to aid in the liberation of Europe, to Arnhem and during the crossing of the Rhine in the Second World War. And it was the vital workhorse in breaking the Soviet Berlin blockade, bringing relief to millions of Berliners.

But, what was good enough for the troops who liberated Europe, and the women and children of Berlin is not good enough for the EU. Courtesy of Gallimaufry & Chips, we learn from the operator's site that, from 13 July this year, flights can no longer be offered. At 0001 hours on 16 July 2008, a new EU law comes into force known as "EU-OPS", a 175-page tome more formally known as Regulation (EC) No 1899/2006 of the European Parliament and of the Council of 12 December 2006 amending Council Regulation (EEC) No 3922/91 on the harmonisation of technical requirements and administrative procedures in the field of civil aviation.

So onerous are the requirements of this law that is now impossible for the company to operate this historic aircraft – one with a flawless safety record in the company's hands, which has afforded harmless pleasure to countless thousands of people.

But, of course, our government in Brussels has spoken and must be obeyed. What used to be our regulatory authority the CAA, is reduced merely to circulating operators to tell them that they must comply. And so another small freedom is destroyed, all because our vile politicians are infatuated with the EU.