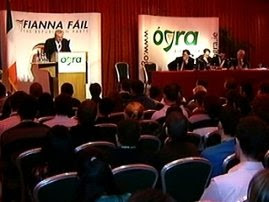 Campaigning is well under way for the Irish referendum on the constitutional Lisbon treaty. Predictably, Bertie Ahern - the man who brokered the first attempt to get the EU constitution into place – was up on the hustings yesterday, urging a "yes" vote.

Considering that Ahern agrees that the Lisbon treaty is "90 percent" the same as the EU constitution, it is interesting to contrast what he was saying in 2004, when he was trying to sell the Mk I version, and how he is selling the same thing now.

In 2004, he was saying that the main benefits of a "constitution for people" is "just the workability of how the Union operates".

Admitting then that the concept for the ordinary person was "difficult", by yesterday he had cleaned up his act. Addressing the Ogra Fianna Fáil national conference in Tullamore, he had settled on a more "user friendly" reason for voting for what he now calls the "reform" treaty.

"Working with our partners, Irish concerns on climate change can be best addressed by a 'yes' vote to the new Reform Treaty," he burbled, adding: "The Reform Treaty restates and strengthens the solidarity with European nations have to combat climate change together."

The funny thing is, in 2004, he never mentioned climate change at all. Dare one suggest that it is not so much "climate change" that is so important as the need to find a reason - any reason - which will sell his darling construct to an unwillng people?