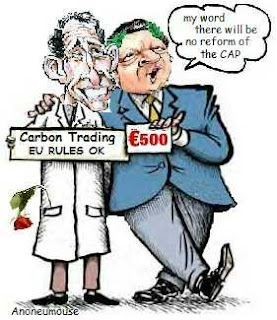 This came after a meeting with el presidente Barroso yesterday and, to an invited audience – where no questions were permitted – Charles declared, "The doomsday clock of climate change is ticking ever faster towards midnight. The lives of billions of people depend on your response and none of us will be forgiven by our children and grandchildren if we falter and fail." The heir to the throne added that millions of people looked to governments, the European Union and international agencies to find a solution to the growing global problem.

Crucially, the Prince then put the EU in the centre frame, in a flight of rhetoric, asking: "Determined and principled leadership has never been more needed. Surely, this is just the moment in history for which the European Union was created?", going on to welcome recent proposals from the EU commission, saying that, "the European Union had a vital role to play in tackling climate change."

Conservative MEPs are purring at this royal endorsement, with Giles Chichester, the Tory leader in the EU parliament happily burbling that: "We Conservatives welcome his vision of a cleaner, better world, and we urge all political parties to work together to deliver it."

UKIP, the only dissenting voice, is less than happy, pointing out that the Prince had a "serious conflict of interest" over climate change because of wind farms on property owned by the royal family – from which he stands to gain millions. "The creation of wind farms is driven primarily by the renewable energy targets set by the European Union," Nigel Farage said in a statement.

Furthermore, as The Times reported on Monday, the Crown Estate stands to reap £100 million in profits per year from wind farms built on foreshores and seabeds it owns. 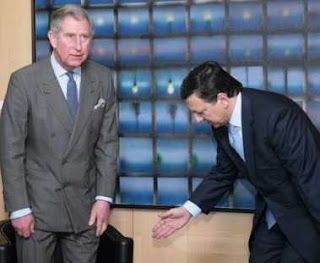 Although the bulk of that income will go to the Treasury, this "windfall" – to coin a phrase – will not do Charles any harm when he comes with his begging bowl to ask for increases to the Civil List. Then there is the small matter of the CAP payments that Prince Charles Plc obtains from the EU.

Even without that, the intervention of the Prince in this highly political issue is, to say the very least, unfortunate. He is coming out strongly in support of a highly contentious (and expensive) EU initiative at the same time the constitutional Lisbon treaty is going through the ratification process. By so doing he is effectively endorsing the EU, the first Royal to do so in such an overt manner.

Meanwhile, the Labour group is trying on its usual diversionary tactics, with their leader, Gary Titley, accusing Farage of "disrespect" in not standing up to applaud the Prince's speech. However, the UKIP office is quick to point out that Farage was the first to stand up when Charles entered the room. See the BBC report here.

Since he came as a senior member of the royal family, that is right and proper, but he spoke as a politician and, in that role, he deserves no more respect than any other member of that self-serving breed.