More on the mass lobby and the House of Lords 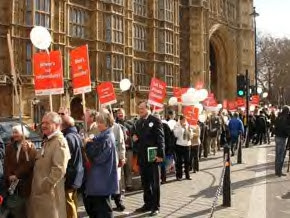 My colleague has already posted on Wednesday's lobbying of MPs, the unfortunate episode of the Green rooftop protest (which will get them absolutely nowhere, I am happy to say) and on Iain Martin’s article with which this blog is broadly in agreement.

I have little to add though I spent a couple of hours there. It was remarkably well attended, given that it was mid-week and whoever came had to take half a day or a day out of their schedule. As a good many people who queued were clearly of working age and equally clearly in employment, that says something. [Both pictures are from the I want a referendum site.]

The posters looked very professional as did the balloons, much as I hate the wretched things. They always burst and there are always children crying. But, let me say it again, fancy dress looks charming on young children and funny on teenagers. It looks stupid and hideous on middle-aged ladies and gentlemen. What will it take for some eurosceptics to realize that dressing up as Britannia or John Bull is counterproductive?

In the short run this will achieve nothing. The House of Commons will not pass a referendum amendment. The obvious purpose of exercise like this is to make the troops feel that they are trying to do something, fighting skirmishes if not major battles. As military commanders always say, it is important to keep the troops’ morale high by activity. 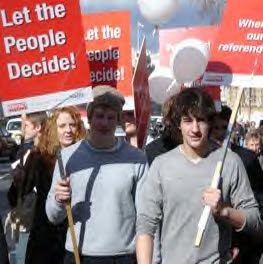 The real battle, as I have said before, will be in the House of Lords and, as it happens, some of us heard a talk about that at the Bruges Group the same evening. It was a somewhat muddled event, which tends to happen when Tory MPs get involved in arrangements. Come to think of it, make that all MPs.

The original plan was to have Bill Cash MP and Richard Younger-Ross MP, Lib-Dim Shadow Minister for Culture, Media and Sport address the multitudes. In fact, Cllr Steve Radford of the real Liberal Party moseyed along just to heckle Mr Younger-Ross. He was sorely disappointed as Mr Y-R announced that he would be late then that he would not come at all because of family matters. The chairman, Barry Legg, wondered whether it had anything to do with the disgraceful events in the House the previous day.

Let me state it for the record: the Deputy Speaker was entirely right and the Lib-Dims behaved abominably. They had already been told that their so-called amendment, really a distraction from the main issue, cannot be tabled as it had nothing to do with the actual debate. If they want to pass a law for an in/out referendum they can do so another time.

Storming petulantly out of the Chamber when your spokesman has been properly chastised from the Speaker’s Chair is infantile behaviour. People who thought it was clever have no respect for or understanding of the parliamentary idea, regardless of who happens to be inhabiting it now. And if you think it was ever different, read some history.

Anyway, back to the Bruges Group. The next thing that happened was Mr Cash pulling out as he was going to bore everyone speak on the Lisbon Treaty in the House. Robert Oulds, the Director, desperately called round and Lord Pearson of Rannoch agreed, very nobly, to step in at the last minute.

I shall write about his speech in a minute. Let me just add that as we were winding up question-time (and some members of the audience need to learn the difference between questions and statements but that’s by the by) Bill Cash MP and John Hayes MP turned up to speak, presumably because the entertainment in the House of Commons had finished.

Their speeches were entirely unmemorable except for the number of times the word “I” came up in them. MPs are incapable of seeing anything except their own performance and that in an overwhelmingly rosy light.

Oh and there was the wonderful episode of Sir Ivan Lawrence QC neatly skewering John Hayes MP, who pompously and long-windedly refused to explain why the Conservative Party thinks it is better for the UK to stay in the European Union than to get out. Presumably, they do not know and cannot think beyond their current mantra.

Lord Pearson’s own talk was of great interest as he outlined what might or might not happen in the House of Lords where there are no guillotines and the debate will carry on for as long as will be agreed.

(Mind you, with Bill Cash announcing that he spoke in the Commons every day of the debate at length and in great detail, I suddenly saw a new and urgent reason for cutting the promised 22 days to just 11.)

The important amendment is, naturally enough, the referendum one and this is still being worked on in the background. It is, for example, essential to work out who should sign that amendment because, as Lord Pearson put it, their lordships do not necessarily read all the material that comes their way but they do look at the signatories of amendments to decide whether these are people they want to follow.

Numbers matter. If there is a three-line whip for Labour and Lib-Dim peers (the latter is now becoming more questionable since it is not clear what if any whip there will be on the subject in the Lower House) then they will have a majority over the Conservatives, particularly as there are likely to be some rebels who will not vote for the amendment.

So a majority of 90 is needed, largely from the cross-benches. Work on that is in progress.

Then we come to the problems of what happens to the amendment, for even if their lordships pass it, that will not be the end of the matter. It will go to the House of Commons, who will, undoubtedly, reject it and there will be the famous ping-ponging between the Houses, with their lordships needing to keep their collected nerve. As this applies to the Conservative whips as well, I am not very sanguine. Really, a larger majority than 90 would be a good idea.

Then, Lord Pearson said, we come to a fork in the road. Suppose the referendum amendment goes through and we have one. As it happens, the first effect will be that ratification of the Constitutional Reform Lisbon Treaty will be held up with unforeseen consequences but he did not discuss that.

Nor did he discuss the possibility that we might lose the referendum. But, suppose, we win it. In Lord Pearson’s opinion, and he has been quite consistent on this for years, we would then be faced with a situation not dissimilar to the mess that followed the Dutch and French referendums.

The government is not going to call a halt to the treaty and the opposition is unlikely to demand it particularly strongly. It is unlikely that we shall simply be given a few opt-outs. Instead, some of the Articles will be pushed through by stealth or, rather, with nobody paying any attention in the general rejoicing, and in a year or so, another IGC will come up with another treaty on which there will most definitely not be a referendum.

Net result would probably be worse for us, though I am not sure he has taken into account the fact that each IGC has been considerably more difficult for the colleagues than the one before it. The idea of another one appals them.

If, on the other hand, the referendum amendment is lost, then, paradoxically, according to his lordship, we shall be better off with the huge discontent that is rolling across the whole of the European Union (and Lord Pearson is against the whole shebang not just Britain’s membership of it) the tensions will increase and it will implode.

That is working on good Leninist principles and I can’t say I disagree with him. While we must all concentrate on the fight for a referendum at the moment, as it focuses people’s attention, it is not, in the opinion of this blog, necessarily the right response. There are too many imponderables and there is the undoubted problems that a no vote will change very little. It is, perhaps, better to show the whole process up for what it is and affirm the cowardice of the europhiliacs who must, somewhere deep down, realize that their cause is unpopular.

The other aspect of Lord Pearson’s presentation was his fight with the BBC. My colleague has already written about it. All I need to add is a link to Global Britain, a website that is more or less under Lord Pearson’s control (at one remove – no-one can accuse his lordship of being computer-literate), which will have the latest report of the Editorial Standards Committee as soon as it is technically possible and already has his letters to that organization.

In the meantime, with the express permission of Lord Pearson, I am putting up his letter to Sir Michael Lyons, Chairman of the BBC Trust Unit, here:

Your Editorial Standards Committee is publishing tomorrow (at last) its decision on Global Britain’s complaint against the Today Programme’s coverage of the EU from September to December 2006. As with previous complaints, that complaint was based on detailed analysis by Minotaur Media Tracking (David Keighley and colleagues).

We have not had time to respond to the ESC’s report in detail, but it is clearly a whitewash. The Committee has adopted without query their independent assessor’s report; I cannot help feeling it is regrettable that they chose someone who was employed by the BBC for 20 years.

Perhaps the most worrying aspect of the ESC’s judgment is its acceptance that programme staff are judge and jury on editorial matters. There is therefore no independent judgment on the real issues underlying the ‘European’ debate, no attempt to find out and expose how the project of European integration is being driven. The ESC does not accept that the BBC, with its uniquely privileged position, should take the lead in this, and make the news agenda, instead of being content to follow the Brussels PR machine. So Mark Mardell, the Europe Editor appointed to provide deeper coverage in the wake of the Wilson Report, appeared only 3 times in the 4 months.

The ESC accepts that nothing much was going on in the period under review, justifying Today’s return to pre-Wilson Report levels of coverage. But much was happening; the whole Constitution was being revived, with its attendant issues of immigration, justice and home affairs, over-regulation, foreign policy, national vetoes and much else. Surely the BBC has a duty to expose these things while they are in the melting pot, not just wait until they emerge in the shape of a Treaty which can only be wholly accepted or rejected by Parliament? There was no substantive discussion of the EU Constitution during the entire survey period, and Today didn’t feature the December 06 Summit at all, except for two brief bulletins.

We have continued to monitor Today since December 2006, and I fear the picture remains the same. It managed to spend 4 times as much time on the Glastonbury festival as it did on the June 2007 EU summit. When it did run a feature on the scandal of the Common Fisheries Policy, it omitted to mention that the policy is imposed by Brussels. And so it goes on.

I will write gain with a detailed rebuttal of the ESC’s report. I hope this will be helpful to you and the Trustees.

As they say on the other side of the Pond: enjoy.
Posted by Helen at 16:56