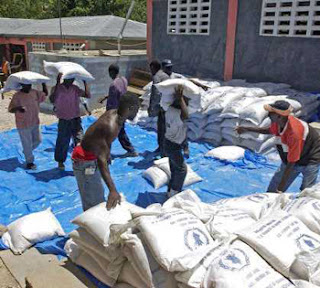 Even if the issue is by-passing most of the MSM, The Financial Times is on the ball, reporting on the growing crisis in the world's food supply.

Headlining its latest piece, "High food prices may force aid rationing," it records that the United Nation's World Food Programme is drawing up plans to ration food aid in response to the spiralling cost of agricultural commodities.

It is in the process of holding crisis talks to decide what aid to halt if new donations do not arrive in the short term, with Josette Sheeran, the WFP executive director, telling the FT that the agency would look at "cutting the food rations or even the number or people reached" if donors did not provide more money.

She complains that, "Our ability to reach people is going down just as the needs go up," warning that the agency's budget requirements were rising by several million dollars a week because of climbing food prices.

In a worrying development, the WFP is noting the emergence of a "new area of hunger" in developing countries. Even middle-class, urban people are being "priced out of the food market" because of rising food prices. The price jump in agricultural commodities – such as wheat, corn, rice and soyabeans – is having a wider impact than thought, hitting countries that have previously largely escaped hunger.

Hunger, Sheeran says, is now "affecting a wide range of countries", including Indonesia, Yemen and Mexico. Thus, the WFP, which normally provides aid in areas where food was unavailable is finding itself asked to help countries where the price of food, rather than shortages, is the problem.

Across the world, there are disturbing signs that the shortage is biting. In Egypt – which has had limited rationing for some time – the food rationing system for the first time in two decades. Pakistan has reintroduced a ration card system that was abandoned in the mid-1980s. Countries such as China and Russia are imposing price controls while others, such as Argentina and Vietnam, are enforcing foreign sales taxes or export bans. Importing countries are lowering their tariffs.

Nor is the price pressure abating. Soyabean prices on Friday hit an all-time high of $14.22 a bushel while corn prices jumped to a fresh 12-year high of $5.25 a bushel. The price of rice and wheat has doubled in the past year while freight costs have also increased sharply on the back of rising fuel prices.

In all, the world’s poor countries will have to pay 35 percent more for their cereals imports, taking the total cost to a record $33.1bn (in the year to July 2008, even as their food purchases fall two percent, according to the UN's Food and Agriculture Organisation.

On the back of that, the US Department of Agriculture has warned that high agricultural commodities prices would continue for at least the next two to three years.

In our insulated, comfortable existences in the developed world, there are, of course, no shortages. We have the wealth to buy food off the world market while others starve, and while the EU fritters away agricultural funds on its vanity project, the Galileo satellite navigation system.

Inevitably, through, food scarcity translates into political instability, a factor that most often intensifies food shortages and is the major cause of famine. And, while member state governments and the media prefer to bury their heads in the sand on this issue, the crisis is real enough and growing.